If you felt a slight pull in the direction of our nation's capitol recently, it might have to do with a giant event that will culminate in veritable science-apoolza this weekend. This thing is something called the USA Science & Engineering Festival, and we're excited to be part of it here at Chandra. 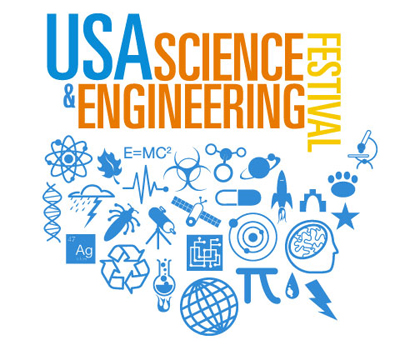 The USA Science & Engineering Festival (which really begs for a catchy acronym or at least a decent nickname) is the country’s first national science festival. There will be over 1,500 hands-on science activities and 75 stage shows and performances on the National Mall in Washington, DC, and surrounding areas. All of the sci-eng fun will be happening on Saturday, October 23rd, and Sunday, October 24th, from 10:00am to 5pm. It's such a big deal that the White House just issued a press release about it.

The Chandra exhibit will be in booths 404 and 406 on the National Mall itself – take a look at the exhibits map that can be found under "Grand Finale Expo" on the Festival's website. We'll be there with ways to help you explore the dark side of the Universe – dark energy and dark matter. We're also teaming up with the folks from Microsoft's Worldwide Telescope for the weekend, so you can learn about that great project in the
same stop.

We hope many of you can make it to the Festival this weekend. For those of you who aren't close to DC, don't worry. There are plans in the works to make these science festivals happen all over the country. In the meantime, many science centers and other organizations are putting on their own local activities in celebration of the Festival this weekend, so you should take a look. We'll be posting some updates from the Festival so keep checking your Chandra Facebook and Twitter accounts as well as looking at the blog for a wrap up of the weekend.

Category:
Events
Disclaimer: This service is provided as a free forum for registered users. Users' comments do not reflect the views of the Chandra X-ray Center and the Harvard-Smithsonian Center for Astrophysics.
Please note this is a moderated blog. No pornography, spam, profanity or discriminatory remarks are allowed. No personal attacks are allowed. Users should stay on topic to keep it relevant for the readers.
Read the privacy statement