Picturing the Origin of a Press Release 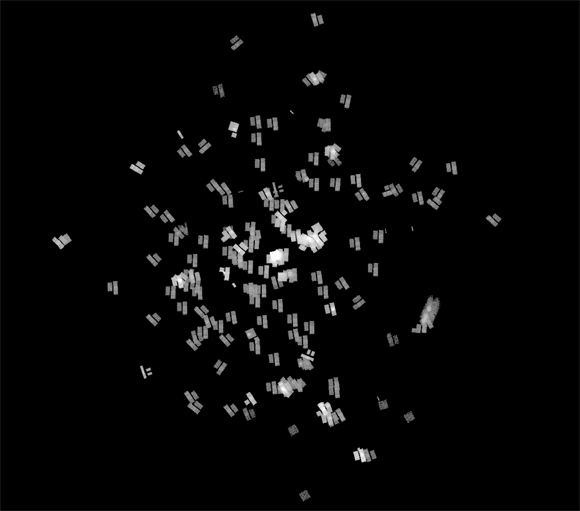 What does this image show? It looks very different from images that typically appear on our web-site, of galaxies and star clusters and exploded stars. It looks vaguely like a swarm of moths but with rectangular shapes that don't really look like wings. It might also pass for abstract art.

The answer is an astronomical one: this is a large mosaic showing Chandra observations from its archive centered on the Virgo Cluster. The rectangles are sets of charge-coupled devices (CCDs) on Chandra, showing X-ray emission from hot gas in the cluster's atmosphere, or around black holes. The rectangles often come in pairs because this is how a common configuration of Chandra CCDs appears on the sky: two square CCDs next to a set of three. The observations are scattered around because they targeted many different galaxies in and around Virgo.

The field of view shown here is enormous, about 20 degrees wide, equivalent to about 40 full moons. Virgo is the nearest galaxy cluster to the Earth and galaxy clusters are the largest objects in the Universe that are held together by gravity, so it's not surprising that Virgo would appear to be large. But, even knowing these details, it's impressive to think about a structure appearing to be this large when it's located about 50 million light years away, well beyond the Milky Way and other galaxies in the Local Group.

This image doesn't just show how large Virgo is, but it also provided the initial motivation for the Chandra result described in our latest press release. Some time ago, Bill Forman, from Harvard-Smithsonian Center for Astrophysics (CfA) and the second author of the paper described in the release, had obtained this mosaic from another co-author, Zhiyuan Li, also from CfA. Bill was "browsing" the mosaic, since he knew most of the Virgo galaxies by name, including ones with gas tails showing their motion through the hot gas in Virgo. As Bill's eyes moved further away from the middle of the cluster, where the hot gas becomes fainter, he noticed a surprisingly bright X-ray source with a tail that should not have been there at all. This was NGC 4342, a member of a group of galaxies about 75 million light years away, well beyond the Virgo cluster (roll your mouse over the image above to see NGC 4342).

At first Bill and his collaborators were fascinated by how luminous NGC 4342 was in X-rays. They also noted evidence - from previous observations - that its galaxy contains a supermassive black hole that is unusually massive compared to the galaxy. One possibility was that stars in the galaxy had been pulled away by gravity during interactions with other galaxies. They applied for a deeper Chandra observation to test this idea and were able to show that "tidal stripping" was not making the galaxy less massive than expected.

The Chandra data also showed that NGC 4342 contains large amounts of dark matter. After further study they realised that the massive black hole, the large dark matter halo and the widespread hot gas are "normal" and consistent with each other, but somehow the galaxy contains too few stars. This is not because it was compromised by close encounters with other galaxies, but because a more subtle form of arrested development must have taken place.

Do more examples like NGC 4342 exist? The authors searched for other galaxies that have an unusually massive black hole compared to the central bulge of stars. They found another galaxy, NGC 4291, which fortunately had been observed with Chandra. This galaxy was also found to have a massive dark matter halo, providing another example of a galaxy that underwent arrested development.

The paper describing these results is being published in The Astrophysical Journal and is titled: "Exploring the Unusually High Black Hole-to-Bulge Mass Ratios in NGC4342 and NGC4291: The Asynchronous Growth of Bulges and Black Holes".