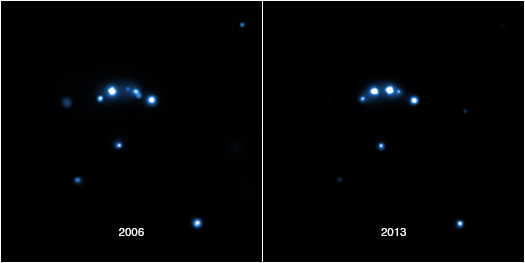 These two images from NASA's Chandra X-ray Observatory show a large change in X-ray brightness of a rapidly rotating neutron star, or pulsar, between 2006 and 2013. The neutron star - the extremely dense remnant left behind by a supernova - is in a tight orbit around a low mass star. This binary star system, IGR J18245-2452 (mouse over the image for its location) is a member of the globular cluster M28.

As described in a press release from the European Space Agency, IGR J18245-2452 provides important information about the evolution of pulsars in binary systems. Pulses of radio waves have been observed from the neutron star as it makes a complete rotation every 3.93 milliseconds (an astonishing rate of 254 times every second), identifying it as a "millisecond pulsar."

The widely accepted model for the evolution of these objects is that matter is pulled from the companion star onto the surface of the neutron star via a disk surrounding it. During this so-called accretion phase, the system is described as a low-mass X-ray binary because bright X-ray emission from the disk is observed. Spinning material in the disk falls onto the neutron star, increasing its rotation rate. The transfer of matter eventually slows down and the remaining material is swept away by the whirling magnetic field of the neutron star as a millisecond radio pulsar forms.

The complete evolution of a low-mass X-ray binary into a millisecond pulsar should happen over several billion years, but in the course of this evolution, the system might switch rapidly between these two states. The source IGR J18245-2452 provides the first direct evidence for such drastic changes in behavior. In observations from July 2002 to May 2013 there are periods when it acts like an X-ray binary and the radio pulses disappear, and there are times when it switches off as an X-ray binary and the radio pulses turn on.

The latest observations with both X-ray and radio telescopes show that the transitions between an X-ray binary and a radio pulsar can take place in both directions and on a time scale that is shorter than expected, maybe only a few days. They also provide powerful evidence for an evolutionary link between X-ray binaries and radio millisecond pulsars.