Blog Posts on a Black Hole Ripping Apart a Star

We are delighted to welcome guest blog posts from Peter Maksym from the University of Alabama and Davide Donato from NASA’s Goddard Space Flight Center (GSFC). These posts give more information about our new press release concerning evidence for a black hole ripping a star apart in a dwarf galaxy. Peter and Davide led two independent studies of this exciting find. We begin with Peter’s blog post.

Small but vicious: a star meets a grisly end in startling place 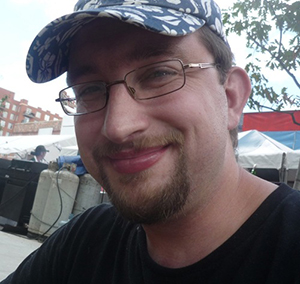 Peter Maksym is a postdoctoral researcher at the University of Alabama in Tuscaloosa. He grew up in Wheaton IL near Chicago, just a bike ride from Fermilab. After his Bachelor studies at Yale and a brief consulting job, he worked for five years as a Chandra data specialist at the Harvard-Smithsonian Center for Astrophysics. In 2012, he earned his Ph.D. in Physics and Astronomy at Northwestern. Peter is interested in massive black holes, their feeding habits, and what those things tell us about their host galaxies, and is also a member of the Galaxy Zoo team. His Twitter feed is @StellarBones.

When I started my Ph.D., I was already interested in black holes. So I was excited to be hunting for tidal disruption events (TDEs). "TDE" is shorthand for the cataclysm that occurs when a star is ripped apart by a black hole. Gravity gets stronger as you get closer to a massive object. That's why the earth has tides - the moon pulls more strongly on earth's closer side, which stretches and squeezes the earth just enough to slosh the oceans around. With a black hole, this effect is much more dramatic. It can stretch out a passing star like a piece of spaghetti. When the remaining shreds of the star fall onto the black hole, the black hole can't eat it all at once. The star basically crashes into itself so hard that it heats up and gives off X-rays.

These TDEs aren't just dramatic. They're rare. The massive black hole at our Galaxy's center might rip up a star only a few times every 100,000 years. TDEs are also one of the only ways we can see intermediate-mass black holes (IMBHs). Little ones (a few suns in mass) are common and nearby, and supermassive black holes are far away but powerful and easy to find. Intermediate-mass black holes are neither so powerful nor so common, so they're hard to find. Our Galaxy's tiny neighbor galaxies, the Magellanic Clouds, are right next door and could have IMBHs. But until those black holes start eating, they will be very hard to spot.

Since TDEs are rare, we had to get creative. Galaxy clusters like Abell 1795 (A1795) contain thousands of galaxies. Astronomers use Chandra to look at the hot gas sitting at the cores of these clusters, so the Chandra data team knows A1795 very well. It's a calibration source - ever since its launch in 1999, Chandra has been taking pictures of the same gas over and over again to see how its cameras handle rough conditions in space. A1795 was a great dataset to look at. 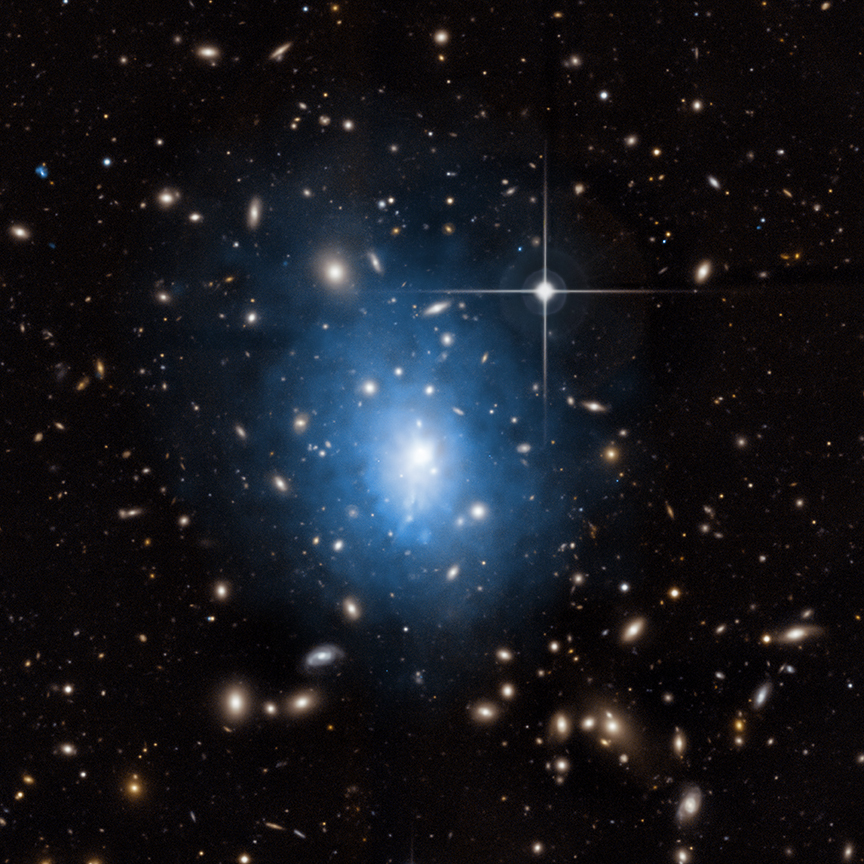 When I found a bright flare in A1795 from the beginning of the Chandra mission, I couldn't believe that nobody had written anything about it yet! Of course, I wanted to see if there was more to it than the Chandra data, which only went back to late 1999. With a little digging, I found out that in 1998, scientists using the Extreme Ultraviolet Explorer (EUVE) had found an even brighter flare at roughly the same spot, just in a slightly lower-energy waveband. But EUVE couldn't follow the flare as it faded because it wasn't as sensitive or sharp as Chandra. The Chandra data and the EUVE data fitted each other like pieces of a puzzle. It was very unlikely that they didn't come from the same TDE.

We were very excited to find this bright X-ray flare in what looked like a tiny, tiny galaxy. Usually, the bigger the galaxy the bigger the black hole at its core, though we don't know how small a galaxy can get and still have this relation be true. The flare is very bright, so we know the black hole must be very massive. But this galaxy is one of the smallest galaxies ever confirmed to host a massive black hole, a tenth as massive as the Large Magellanic Cloud, and easily the smallest one confirmed to produce a TDE. If the black hole were not an IMBH, it would be weird - like a huge ogre cramped inside a doghouse instead of a big cave or castle.

The beauty of serendipity: The discovery of a mid-size black hole destroying a star 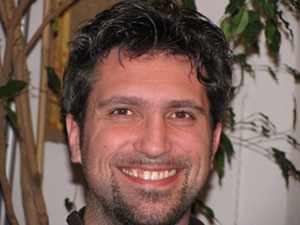 Davide received a Masters in Physics at Universita' Statale di Milano, Italy, in 2000. He enrolled in the PhD program in Computational Sciences and Informatics at George Mason University, Fairfax, VA from 2002 to 2005. He was a NASA Postdoctoral Program fellow from 2006 to 2009 at NASA/GSFC and a research assistant at the University of Maryland, College Park until 2013, when he was appointed as research scientist.

The origin of the X-ray emission from the core of radio galaxies was the topic of my PhD thesis at George Mason University between 2002 and 2005. The great majority of these galaxies reside at the center of clusters. To disentangle the cluster radiation from the emission produced close to the black hole (BH) in the central radio galaxy I used data from the Chandra satellite. During the analysis of the cluster Abell 1795 I noticed the presence of a very bright X-ray source, not associated with any obvious radio galaxy in data taken in Dec. 1999, and fading through the years until it disappeared in data taken in 2005. But at the time I was not interested in transient sources and I did not investigate the nature of that object.

Six years later, the Swift satellite observed the well-studied GRB 110328A, later associated with a case of tidal disruption event (TDE). At that time I was a research associate at the University of Maryland working at NASA/GSFC with Swift data. After discussing with a friend of mine we came to the conclusion that the observed behavior of the Chandra source in Abell 1795 was compatible with being another TDE. I searched all the available archives to obtain additional information of the transient (which was detected in March 1998 by the EUVE satellite by chance) and its host galaxy, and I started to study the physics behind these objects.

What became clear was that this TDE was interesting for 2 reasons: how fast the emission in the UV/X-rays (where most of the TDE radiation is observed) decayed and the fact that the transient happened in a faint, point-like galaxy.

Indeed, initial theoretical work predicted how quickly the emission from TDEs gets dimmer over the years, but the decline we observed in the UV/X-rays was much faster and in agreement with recent, more complex hydrodynamical simulations. Between the first observation by EUVE in 1998 and the last Chandra detection in 2004, the UV/X-ray light curve decreased by a factor of ~2300.

In order to characterize the TDE, I needed the size of the BH capturing the star. Since the archival data could not constrain the nature of the host galaxy and, consequently the size of the BH, more observations were necessary. With the help of some collaborators, in particular Stefano Covino at Osservatorio Astronomico di Brera, Brad Cenko and Ori Fox at NASA/GSFC, and Tapio Pursimo at the Nordic Optical Telescope (NOT), I was able to obtain photometric data of the host galaxy using the NOT telescope in La Palma, Spain, and with the Reionization and Transients InfraRed (RATIR) camera installed at the 1.5m telescope in San Pedro Martir observatory, Mexico, and spectroscopic data with the two 8-meter mirrors of the Large Binocular Telescope (LBT) in Arizona.

The analysis of the LBT data showed no absorption or emission lines in the optical spectrum. While this fact confirmed that we were not observing an active, starburst galaxy, the lack of lines prevented us from determining its distance. We combined all the photometric data and used the "Eazy" software to predict that the galaxy is an elliptical or an S0, characterized by an old stellar population, and likely located at the cluster distance. Assuming that well known relations between the absolute magnitude of bright galaxies and the size of their massive BHs hold for dimmer objects such as this host galaxy, we argue that the central BH is an intermediate one, with a mass between 100,000 and one million times the mass of the sun. This is a very interesting result for two reasons: (1) it supports the idea that intermediate-mass BHs exist. Indeed, only very few cases are known, as they are very difficult to study by other means; (2) it shows that even BHs of this size are capable of capturing and destroying a falling star, as most of the previously known cases of TDE happened in systems with more massive BHs (a million to a hundred million solar masses).

What is next, then? As most UV/X-ray archives have been already exploited, we have to wait for the next generation of all-sky monitoring, as promised by the Large Synoptic Survey Telescope (LSST) and eRosita, to find other similar cases of TDEs and other intermediate-mass BHs.