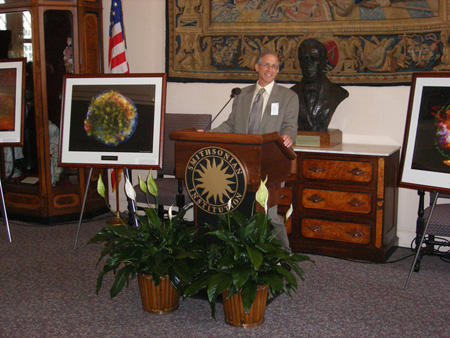 Dr. Harvey Tananbaum at the Smithsonian's Castle Library in May 2006. (Credit: Jim Moran)

On April 20, 2014, Harvey Tananbaum stepped down after 23 years as director of the Chandra X-ray Center (CXC). This event was duly noted in various press releases, but its significance may not have been widely appreciated.

By almost any measure Harvey has been one of the most outstanding directors ever of a major astrophysical observatory. He was director of Chandra for longer than any other director of a world-class telescope. In fact, he became director of Chandra in 1991, 8 years before it was renamed from AXAF (Advanced X-ray Astrophysics Facility) to Chandra upon its successful launch in 1999.

In 1976, Harvey had joined with his mentor, Riccardo Giacconi, to write a proposal for AXAF based on Giacconi's original concept dating back to 1963. During the late 70's and through the 80's, Harvey led the SAO mission support team, which worked with NASA's Marshall Space Flight Center to develop and demonstrate critical technology for the mirrors at the heart of the Chandra Observatory. The MSFC-SAO team then over-saw the building of the observatory. SAO was competitively selected to develop the AXAF Science Center (with Harvey as Director) in 1991 to plan for science operations and to assist the science community in using the observatory. In the mid-1990's responsibility for operations and the observatory health and safety was assigned to the Science Center which was renamed the Chandra X-ray Center shortly before launch.

Throughout the course of the program, Harvey had worked tirelessly to get support from the science community, priority within NASA, and final approval by the Executive branch and Congress. Then when final approval turned out not to be final approval because of a budget crisis at NASA not related to AXAF, Harvey along with MSFC Project Scientist Martin Weisskopf, was in the middle of the effort to restructure the program in ways that ensured not just a successful mission, but one of the most powerful and versatile tools for doing astrophysical research in the 21st century.

The Chandra mission has exceeded its original planned lifetime by ten years, and it consistently ranks first or second with Hubble in measures of scientific productivity such as citations in the scientific literature and the number of research papers (about 6,000 at present for Chandra) published by scientists using the observatories. As Harvey will be the first to tell you, Chandra's success is due to the efforts of not just one, or ten, or even a hundred, but literally thousands of scientists, engineers, managers, programmers, technicians, etc. That is certainly true, but just as certainly, Harvey played a critical role for more than three decades.

In terms of taking the credit for Chandra's success, Harvey is content to fly under the radar. In fact, as a colleague once mentioned, Harvey was for all this time like radar, continually scanning the horizon for problems –and opportunities – to ensure the success of the mission. This has involved looking at abstracts for virtually all of those 6,000 papers and reading a significant subset of them, reviewing technical and engineering reports, interacting and staying informed through countless conversations with the scientists and engineers involved, all while being available 24/7 should a problem or a scientific Target of Opportunity arise.

This is nothing new for Harvey. He did similar work for a shorter time for the Einstein Observatory before Chandra, and before that, for the Uhuru X-ray satellite. It was Harvey's work on Uhuru that caught Giacconi's attention, and he was quickly given increased responsibility, as project scientist for Uhuru, then Scientific Program Manager for the Einstein Observatory, and in 1981 he succeeded Giacconi (who had left to become Director of the Hubble Space Telescope Science Institute) as director of the High Energy Astrophysics division at the Harvard-Smithsonian Center for Astrophysics.

On April 30, I talked to Harvey about his career before, during, and after Chandra. Excerpts of this conversation can be found in the full length article.

Category:
General
Tags:
Chandra
Disclaimer: This service is provided as a free forum for registered users. Users' comments do not reflect the views of the Chandra X-ray Center and the Harvard-Smithsonian Center for Astrophysics.
Please note this is a moderated blog. No pornography, spam, profanity or discriminatory remarks are allowed. No personal attacks are allowed. Users should stay on topic to keep it relevant for the readers.
Read the privacy statement