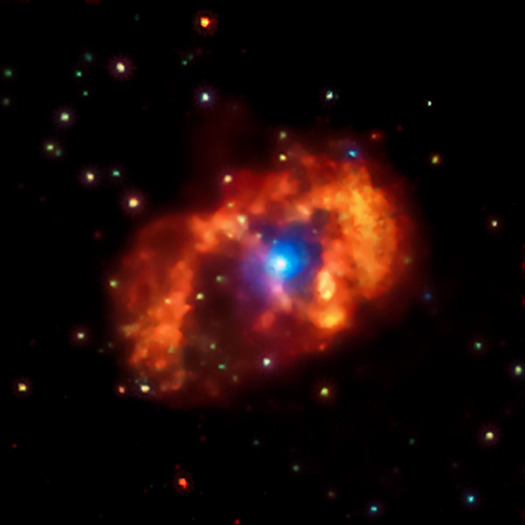 The Eta Carinae star system does not lack for superlatives. Not only does it contain one of the biggest and brightest stars in our galaxy, weighing at least 90 times the mass of the Sun, it is also extremely volatile and is expected to have at least one supernova explosion in the future.

As one of the first objects observed by NASA's Chandra X-ray Observatory after its launch some 15 years ago, this double star system continues to reveal new clues about its nature through the X-rays it generates.

Astronomers reported extremely volatile behavior from Eta Carinae in the 19th century, when it became very bright for two decades, outshining nearly every star in the entire sky. This event became known as the "Great Eruption." Data from modern telescopes reveal that Eta Carinae threw off about ten times the Sun's mass during that time. Surprisingly, the star survived this tumultuous expulsion of material, adding "extremely hardy" to its list of attributes.

Today, astronomers are trying to learn more about the two stars in the Eta Carinae system and how they interact with each other. The heavier of the two stars is quickly losing mass through wind streaming away from its surface at over a million miles per hour. While not the giant purge of the Great Eruption, this star is still losing mass at a very high rate that will add up to the Sun's mass in about a millennium.