A Lighthouse at the Heart of the Milky Way: Hunting Cosmic Neutrinos 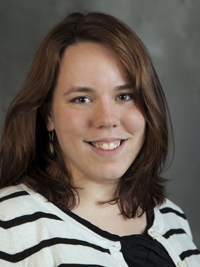 We are pleased to welcome Andrea Peterson as a guest blogger today. Andrea is a co-author of a paper reporting that the supermassive black hole at the center of our galaxy may be a source of highly energetic neutrinos, as explained in our latest press release. Andrea recently completed her Ph.D. at the University of Wisconsin-Madison, where she studied particle phenomenology. She is now a postdoctoral researcher at Carleton University in Ottawa, Ontario. She was born and raised in Minnesota, and received her undergraduate degree from Harvard University. She hopes to live somewhere warm someday.

Neutrinos are tiny particles that zoom through the universe at nearly the speed of light. They interact very rarely, so most of the time they pass right through you, me, or any object they encounter. Their ghost-like nature can be a boon for astronomers: they travel from their sources without getting absorbed or deflected. We can use neutrinos to get a clear picture of the very distant universe.

You may have noticed a problem, though. If they don’t interact very often, how can we catch them here on Earth? They have to interact with our detector to be seen!

The solution is size. The bigger the detector, the more stuff there is for the neutrinos to bump into, increasing the chances of detection. The IceCube Neutrino Observatory, located at the South Pole, uses a cubic kilometer of ice to trap neutrinos. In three years, this giant detector has collected 36 extremely energetic neutrinos that are likely to have come from astrophysical sources. Here’s where I come in. I’m a particle theorist, so I don’t build detectors or collect data (no South Pole excursions for me!). Instead, my job is to figure out where the neutrinos come from and how they’re produced. It’s still early days for neutrino astronomy, so there are lots of interesting ideas floating around. We expect neutrinos to be produced through a variety of known astrophysical phenomena like gamma ray bursts, supernovas, and active galactic nuclei, or possibly something more exotic such as dark matter particles that decay to neutrinos.

Finding the neutrino sources isn’t easy. Sometimes it’s hard to pinpoint exactly what direction the neutrinos come from. There are three types of neutrinos: one type is partnered with the electron, while the other two correspond to the electron’s heavier cousins, the muon and the tau. Muon neutrinos leave a clean track in the detector, but electron and tau neutrinos leave messy showers of particles behind. IceCube uses sophisticated algorithms to reconstruct the neutrino directions, but even so, the showers can only be traced back to a region of the sky that spans ten degrees or more. Each of these regions may contain many potential sources!

Fortunately, there are a few things we can do to get a handle on the situation. One technique is to look for clusters of neutrinos. If lots of neutrinos come from one spot on the sky, it’d be a safe bet that there’s a big neutrino source there. Unfortunately, no such clusters have been found so far, but hopefully more data will change that.

There’s another tactic we can pursue. Usually, the astrophysical powerhouses that could produce very energetic neutrinos also produce energetic photons (X-rays and gamma rays) and cosmic rays (such as protons and alpha particles, made of two protons and two neutrons). Furthermore, these particles aren’t produced at a steady rate, instead occurring in bursts and flares. We can compare the data from observatories like Chandra with the timing and position information of the IceCube neutrinos. If a neutrino is observed around the time of a flare, it’s a strong indication that they’re correlated.

There’s a precedent for such coincidences. One of the very first examples of neutrino astronomy is supernova SN1987A. In February 1987, we observed the explosion of a supergiant star just 168,000 light years away — our next-door neighbor in astronomical terms. Two hours before the bright visible light from the supernova arrived at Earth, a burst of neutrinos was observed at three different observatories, marking the first observation of neutrinos from an astrophysical source. 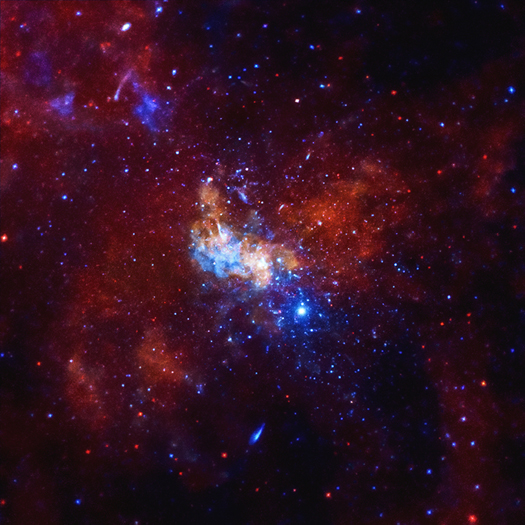 In our recent paper, my collaborators and I argue that a very similar coincidence points to a neutrino source closer to home: Sagittarius A*, the supermassive black hole at the center of the Milky Way galaxy. Sagittarius A* (Sgr A*) is 26,000 light-years away and is about four million times heavier than our sun. Most of the time we only see a faint X-ray glow from Sgr A*, but every once in a while, it emits a giant X-ray flare a hundred times brighter than normal.

The Chandra X-ray Observatory observed one of these flares on February 9, 2012; in fact, it was the brightest one Chandra’s seen from Sgr A*. A bit over two hours later, IceCube caught a high-energy neutrino, and its direction was consistent with Sgr A*. The chance that two unrelated events would be observed so close to the same time is just 1%.

This is great news — we may have found our first neutrino source! But even if our hypothesis is correct, Sgr A* can account for at most a few of the neutrinos observed by IceCube. However, there are many other galaxies that are potential neutrino sources. This observation is a hint that we may be able to find other such correlations elsewhere in the universe.

Though scientists are still exploring what happens near a supermassive black hole, we can make a few predictions. Black holes are surrounded by clouds of gas and dust known as accretion discs in which particles are accelerated and collide. While X-rays are likely generated through electron interactions, neutrinos are the decay products of charged pions, a type of particle produced in proton collisions. Protons can also generate neutral pions that decay into gamma-ray photons instead of neutrinos. So, seeing high-energy neutrinos tells us to keep an eye out for gamma rays, too. This is the idea behind “multi-messenger astronomy”: each new type of observation is an additional piece of a big cosmic puzzle. The production of neutrinos, cosmic rays, and different wavelengths of light are deeply connected and provide complementary information. Ultimately, we hope our theories can help pull together the pieces and let us glimpse the whole picture.

Category:
Black Holes
Milky Way Galaxy
Subcategory:
Women in the High Energy Universe
Disclaimer: This service is provided as a free forum for registered users. Users' comments do not reflect the views of the Chandra X-ray Center and the Harvard-Smithsonian Center for Astrophysics.
Please note this is a moderated blog. No pornography, spam, profanity or discriminatory remarks are allowed. No personal attacks are allowed. Users should stay on topic to keep it relevant for the readers.
Read the privacy statement