A Fresh Perspective on an Extraordinary Cluster of Galaxies 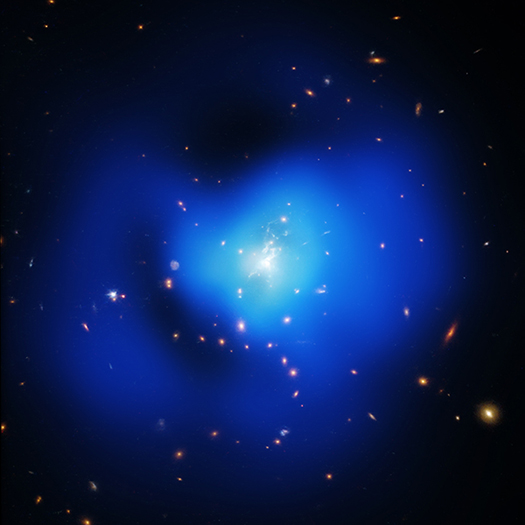 Galaxy clusters are often described by superlatives. After all, they are huge conglomerations of galaxies, hot gas, and dark matter and represent the largest structures in the Universe held together by gravity.

Galaxy clusters tend to be poor at producing new stars in their centers. They generally have one giant galaxy in their middle that forms stars at a rate significantly slower than most galaxies - including our Milky Way. The central galaxy contains a supermassive black holeroughly a thousand times more massive than the one at the center of our galaxy. Without heating by outbursts from this black hole, the copious amounts of hot gas found in the central galaxy should cool, allowing stars to form at a high clip. It is thought that the central black hole acts as a thermostat, preventing rapid cooling of surrounding hot gas and impeding star formation.

New data provide more details on how the galaxy cluster SPT-CLJ2344-4243, nicknamed the Phoenix Cluster for the constellation in which it is found, challenges this trend. The cluster has shattered multiple records in the past: In 2012, scientists announced that the Phoenix cluster featured the highest rate of cooling hot gas and star formation ever seen in the center of a galaxy cluster, and is the most powerful producer of X-rays of all known clusters. The rate at which hot gas is cooling in the center of the cluster is also the largest ever observed.

New observations of this galaxy cluster at X-ray, ultraviolet, and optical wavelengths by NASA's Chandra X-ray Observatory, the Hubble Space Telescope, and the Clay-Magellan telescope located in Chile, are helping astronomers better understand this remarkable object. Clay-Magellan's optical data reveal narrow filaments from the center of the cluster where stars are forming. These massive cosmic threads of gas and dust, most of which had never been detected before, extend for 160,000 to 330,000 lights years. This is longer than the entire breadth of the Milky Way galaxy, making them the most extensive filaments ever seen in a galaxy cluster.