BEHIND THE SCENES OF ‘ASTROLYMPICS’

On August 5th, the 2016 Olympic Summer Games will begin with the Opening Ceremonies in Rio de Janeiro, Brazil. A new project from NASA’s Chandra X-ray Observatory and its Communications group takes a look at the amazing feats performed by Olympic athletes and tries to provide context for them in an innovative way.

AstrOlympics explores a physics-based connection between sports and science by examining topics such as speed, time, distance, mass, pressure, and rotation. The Chandra blog recently interviewed two of the co-creators of the AstrOlympics project, Kim Arcand (KA) and Megan Watzke (MW), to find out what it is all about.

Why did you want to create the AstrOlympics project?

MW: The Olympics are very exciting for me and, like many people, I try to watch as much of the Games as I can. One of the things that I am always curious about is how do the athletes’ abilities compare to things that I experience in my every day life? It’s the same challenge we face when we when are trying to explain the range of phenomena scientists discover in objects in space, which is what we often do for Chandra results. Our idea then became to join the two concepts into one project.

KA: Earlier this year, I met Michelle Kwan, US Figure Skating champion and Olympic medalist, at an event in Rhode Island. We each briefly discussed what we did working with the US Department of State and their American Spaces program. I left feeling completely inspired, and it led me want to connect the physics of her spins on the ice with neutron stars that spin in space. From there it grew to encompass the Olympics as a whole. 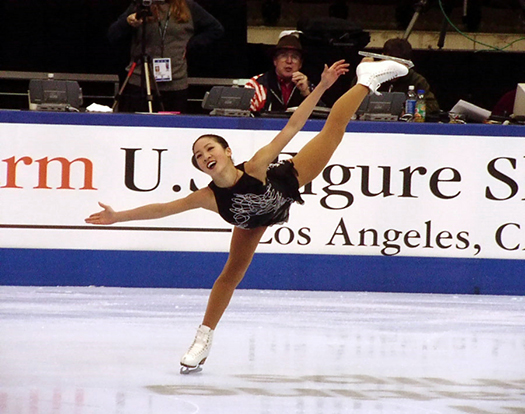 The Olympics and astrophysics seem very different, so why compare them?

KA: As part of the Chandra Communications Group, we’ve done many projects over the years trying to show how studying space is not just an esoteric exercise that can seem incredibly remote. By adding relevance, such as comparing a bee pollenating flowers with a farmer sowing her fields with an exploded star seeding the Universe with heavy elements, we can look at how we view things a bit differently. Exploring the Universe is fascinating and important in its own right, of course, but there are also fundamental connections to the science we experience everyday here on Earth. We have found it powerful to make those connections more explicit to help communicate not only the underlying physics, but also why scientific exploration is so exciting and ultimately useful. 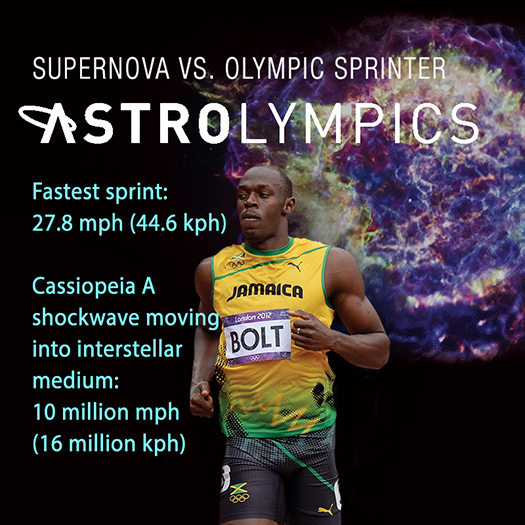 What’s your favorite topic of AstrOlympics?

MW: It’s hard to pick one because I think they are all really fascinating. If I had to, however, I’d probably go with pressure. It turns out that pressure has one of the largest ranges of magnitude of all physical parameters. Of course, we’re talking about the physical definition of pressure – force over a given area – not the psychological pressure that all of these Olympic athletes must undoubtedly feel! 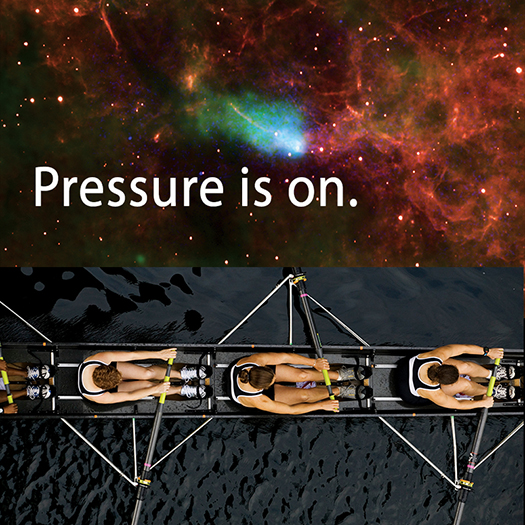 In addition to the materials online, where can I find the AstrOlympics project?

KA: In recent years, we have developed a great partnership with the US State Department. (They have been very helpful in distributing our “Light: Beyond the Bulb” [link] project for the International Year of Light 2015, for example.) They will be hosting the AstrOlympics material in some of their American Spaces locations, which are open to anyone who is interested in learning more about American culture, including science. We created our materials in English, Portuguese and Spanish, so a number of spots in Brazil and surrounding countries near the Olympics will host them as well. Additionally some US libraries and science centers will be exhibiting the materials, thanks to networks we’ve built from NASA’s Museum Alliance and the American Library Association.

What do you hope people will get out of AstrOlympics?

MW: One of my goals is that people realize that science is all around us. Whether it is in our daily lives or something special like the Olympic Games or even as exotic as objects in space, science connects everything.

KA: The work we do for NASA’s Chandra X-ray Observatory is publicly funded by US taxpayers. We feel an extreme sense of responsibility to work to erase barriers that people might have in accessing that funded research. Since physical access can be an issue for some audiences, we work to put materials in public spaces such as parks, hospitals, or bus stops. When it’s technological access, we work to hand out physical print materials. If there is a lack of context for the subject matter, we try to improve how we relate and explain the scientific findings. The point is to add more access points for our audiences, whether self-selected or not. And this project is just one attempt to help address that issue of access.

Find out more about this project at http://chandra.si.edu/olympics/
Many thanks to the International Olympic Committee for allowing use of their videos and photos.

Category:
General
Tags:
Chandra
Disclaimer: This service is provided as a free forum for registered users. Users' comments do not reflect the views of the Chandra X-ray Center and the Harvard-Smithsonian Center for Astrophysics.
Please note this is a moderated blog. No pornography, spam, profanity or discriminatory remarks are allowed. No personal attacks are allowed. Users should stay on topic to keep it relevant for the readers.
Read the privacy statement