The Discovery of Particle Re-acceleration in a Galaxy Cluster Collision 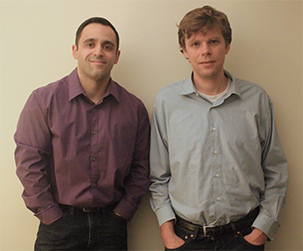 For this guest blog post, we are lucky to have not one, but two, contributors. Reinout van Weeren obtained his PhD from Leiden University, The Netherlands, before moving to the Harvard-Smithsonian Center of Astrophysics as an Einstein Postdoctoral Research Fellow. He is currently a Clay Fellow at the same place. He works on merging galaxy clusters, focusing on combined radio and X-ray observations. Felipe Andrade-Santos obtained his PhD from the Universidade de São Paulo, Brazil, before becoming a postdoctoral research fellow at the Harvard-Smithsonian Center of Astrophysics. He works on X-ray observations of galaxy clusters and galaxy cluster samples. Reinout and Felipe recently presented their study on the merging galaxy cluster system Abell 3411 and 3412 at the 229th meeting of the American Astronomical Society meeting in January 2017.

Galaxy clusters are the most massive objects in the Universe bound together by gravity and contain up to a few thousand galaxies. They are also permeated by very thin 100-million-degree gas that is held together by the cluster's strong gravitational pull. This hot gas can be imaged with X-ray satellites such as NASA's Chandra X-ray Observatory. Galaxy clusters form by mergers of smaller clusters and galaxy groups. During a merger event, which typically lasts for about a billion years, the galaxies mostly fly past each other without strongly interacting. In contrast, the diffuse gas in the merging clusters collides, creating giant shock waves, which are cosmic versions of sonic booms generated by supersonic aircraft. Cluster mergers have been of great interest to astronomers and us because of the extreme physical processes that take place during such events.

Radio telescopes have shown that large regions of merging galaxy clusters glow at radio wavelengths. The radio emission is produced by tiny particles, called electrons, which spiral around magnetic field lines and have energies that are a million times higher than the particles making up the hot cluster gas. Astronomers have long been puzzled by how these energetic electrons are produced. One idea is that the energetic particles are accelerated to these extreme energies by shocks created when clusters collide and merge.

Over the last decade it has become clear that radio emission in merging clusters indeed originates at the location of the shocks detected in the X-ray emitting gas. However, one major problem remained: calculations showed that cluster shocks are too weak to efficiently accelerate particles and produce observable radio emission. Were the calculations wrong? This was a possibility, as the theory of particle acceleration is very complicated. Or did the X-ray measurements underestimate the cluster's shock strength? Or was there some other ingredient missing?

In 2011, we took short Chandra X-ray observations of the cluster called Abell 3411-3412, which is located about 2 billion light years from Earth, as part of a large program to observe many galaxy clusters. These short Chandra observations of Abell 3411-3412 immediately revealed something very interesting: this cluster was undergoing a very violent major merger. We therefore immediately decided to search for radio emission produced by the shocked gas. Obtaining data from the NSF's Karl G. Jansky Very Large Array in New Mexico, we discovered the presence of extended radio emission that we speculated was coming from a shock wave created by the violent merger. However, the Chandra observations were too short to reveal the merger shock itself. So we decided to propose for much deeper observations with Chandra and the Giant Metrewave Radio Telescope (GMRT) in India. In addition, optical data with the Subaru and Keck telescopes were taken to study the galaxies in the cluster.

The new radio data allowed us to pinpoint the location of the extended radio emission, and the deeper Chandra data revealed the signatures of a weak shock at the location of the radio emission. This gave us compelling evidence that electrons were somehow being accelerated by the cluster shock. However, the most exciting discovery was something unexpected: our images showed a jet of radio emission originating from a galaxy extending towards the radio emission associated with the shock. This galaxy is an active galactic nucleus (AGN) that hosts a supermassive block hole in its center. These AGN are able to accelerate particles to extreme energies producing radio jets and lobes. To confirm that this galaxy belonged to the cluster – and not located in front of or behind the cluster – we contacted Brazilian astronomers Vinicius Placco and Rafael Santucci who had access to the SOAR telescope in Chile. Two months later, in November 2015, this galaxy was observed and we were able to measure its redshift (distance), which showed that the galaxy is indeed a cluster member.

With the above evidence in hand it became clear what was going on. Energetic particles, accelerated by a supermassive black hole in the core of a galaxy, are accelerated a second time when they encounter a shock from the merging clusters: the particles receive a double boost of energy. This re-acceleration provides the answer to why some weak cluster shocks are so efficient in producing radio emission. The shocks are supplied by very energetic particles and these only need to receive a mild boost in their energy to explain the observed radio emission. We expect that new and upgraded radio telescopes, being much more sensitive, will reveal many more connections between merger shocks and AGN. Such studies will be crucial to fully understand the origin of energetic particles and magnetic fields that are present in galaxy clusters. 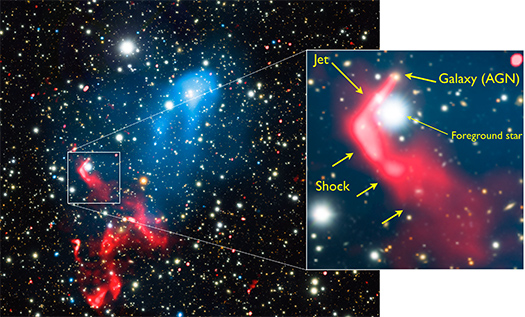 A combined GMRT radio (red), Chandra X-ray (blue), and Subaru optical image of the colliding galaxy cluster pair Abell 3411-3412. In the hot dilute cluster gas (blue), high-energy electrons accelerated by an AGN (see inset) are accelerated again at a giant shock, producing bright radio emission. The radio emission farther below is probably produced by a similar process because several other AGN are located nearby.
Category:
Groups & Clusters of Galaxies
Disclaimer: This service is provided as a free forum for registered users. Users' comments do not reflect the views of the Chandra X-ray Center and the Harvard-Smithsonian Center for Astrophysics.
Please note this is a moderated blog. No pornography, spam, profanity or discriminatory remarks are allowed. No personal attacks are allowed. Users should stay on topic to keep it relevant for the readers.
Read the privacy statement