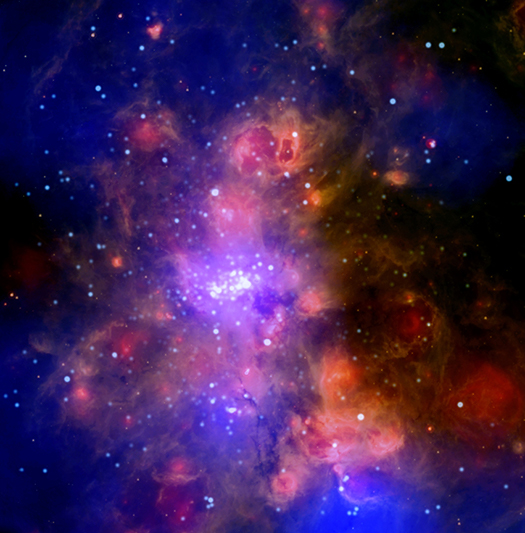 In the context of space, the term 'cloud' can mean something rather different from the fluffy white collections of water in the sky or a way to store data or process information. Giant molecular clouds are vast cosmic objects, composed primarily of hydrogen molecules and helium atoms, where new stars and planets are born. These clouds can contain more mass than a million suns, and stretch across hundreds of light years.

The giant molecular cloud known as W51 is one of the closest to Earth at a distance of about 17,000 light years. Because of its relative proximity, W51 provides astronomers with an excellent opportunity to study how stars are forming in our Milky Way galaxy.

A new composite image of W51 shows the high-energy output from this stellar nursery, where X-rays from Chandra are colored blue. In about 20 hours of Chandra exposure time, over 600 young stars were detected as point-like X-ray sources, and diffuse X-ray emission from interstellar gas with a temperature of a million degrees or more was also observed. Infrared light observed with NASA's Spitzer Space Telescope appears orange and yellow-green and shows cool gas and stars surrounded by disks of cool material.

W51 contains multiple clusters of young stars. The Chandra data show that the X-ray sources in the field are found in small clumps, with a clear concentration of more than 100 sources in the central cluster, called G49.5−0.4 (pan over the image to find this source.)

Although the W51 giant molecular cloud fills the entire field-of-view of this image, there are large areas where Chandra does not detect any diffuse, low energy X-rays from hot interstellar gas. Presumably dense regions of cooler material have displaced this hot gas or blocked X-rays from it. One of the massive stars in W51 is a bright X-ray source that is surrounded by a concentration of much fainter X-ray sources, as shown in a close-up view of the Chandra image. This suggests that massive stars can form nearly in isolation, with just a few lower mass stars rather than the full set of hundreds that are expected in typical star clusters.

Another young, massive cluster located near the center of W51 hosts a star system that produces an extraordinarily large fraction of the highest energy X-rays detected by Chandra from W51. Theories for X-ray emission from massive single stars can't explain this mystery, so it likely requires the close interaction of two very young, massive stars. Such intense, energetic radiation must change the chemistry of the molecules surrounding the star system, presenting a hostile environment for planet formation.

A paper describing these results, led by Leisa Townsley (Penn State), appeared in the July 14th 2014 issue of The Astrophysical Journal Supplement Series and is available online.