Studying Comet 46P/Wirtanen During its Close-by Visit Near Earth 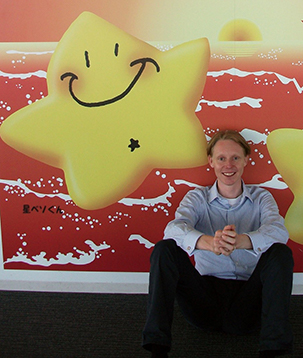 Dennis Bodewits in Japan during the
‘Comets, Meteors, and Asteroids’ conference.

We welcome Dennis Bodewits as a guest blogger. Dennis studies the chemical and physical behavior of comets. He is an associate professor at Auburn University in Auburn, Alabama, and leads a large observing campaign combining multiple NASA spacecraft to study comet 46P/Wirtanen during its close-by visit near Earth. He loves the outdoors, mountain biking in Auburn's Chewacla State Park, and has piloted a human-powered helicopter.

I got into comet research while conducting experiments at the University of Groningen in the Netherlands. My work supported fusion — where two lighter nuclei join to create heavier ones — research. To measure the temperature in fusion plasmas, you can't just stick a thermometer in your reactor. Instead, the idea was to let in a little bit of trace gas which would make the ions, that is, atoms that have a positive charge, glow.

It turned out that the main reaction responsible for this light, charge exchange, had been discovered in comets. Charge exchange is the process where a charged ion collides with a neutral atom or molecule and captures one of its electrons. Light is then emitted as the captured electron moves to a lower energy state. This process is especially important in comets where ions from the solar wind collide with neutral atoms in cometary atmospheres. For my doctorate I worked on trying to find out what I could learn about comets and the solar wind from charge exchange emission, combining lab work with Chandra observations.

Charge Exchange Process. When highly charged solar wind ions collide with a neutral gas, they can capture one or more electrons. This results in X-ray emission that can be used a fingerprint of the underlying reaction. (Credit: D. Bodewits/Auburn University)

ROSAT (short for the Roentgen satellite) was a German-led X-ray telescope that operated in the 1990s. ROSAT's discovery that comets emit X-rays was very strange. Comet gas is very cold, 50 degrees Kelvin or so, while X-ray emission requires temperatures of millions of degrees. When scientists looked at the ROSAT archives, they found that lots of comets emitted X-rays. It turned out that highly charged carbon and oxygen ions from the Sun collide with water vapor in the comet's atmosphere. Just like in my lab experiment, these ions capture one or more electrons into highly excited states. The solar wind ions relax to the ground state by emitting X-rays. Since the first discovery in comets, charge exchange emission has been discovered around Mars, supernova remnants, and will be used to study how Earth's magnetosphere reacts to solar weather.

Solar wind charge exchange emission carries a lot of information about the comet, about the solar wind, and their interaction. You can use relative amounts of ions of different charge to measure the temperature of the part of the Sun where the solar wind came from. The X-rays themselves create a map of the distribution of the neutral gas surrounding the comet, revealing jets and active sources. Recent modeling suggests that you can even use the X-ray spectrum to measure the composition of the comet gas, tracing CO2 gas that cannot be detected from Earth. However, to really make the most of the X-ray diagnostics, we need to understand the underlying charge exchange reactions very well. Combining theoretical calculations with new experiments is a major focus of our research at Auburn University. 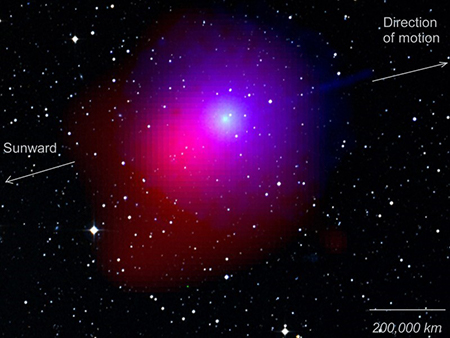 Swift Observatory View of Comet Lulin: Swift's XRT is much smaller than Chandra’s ACIS, but this very bright comet allowed us to simultaneously capture the distribution of neutral comet gas in the ultraviolet (blue) and the solar wind in X-ray (red). The X-ray emission is off set towards the sun because the solar wind ions lose their charge traveling through the comet atmosphere. [More at NASA's Astronomy Picture of the Day (APOD).]

This month, comet 46P/Wirtanen passed within 12 million kilometers from Earth, becoming the tenth closest comet in modern history. We are combining Chandra's unique view point with simultaneous observations by the Hubble Space Telescope and the Neil Gehrels Swift Observatory. Each observatory covers a different part of the electromagnetic spectrum. We hope that taken together, these separate observations will give us a complete picture of the chemical and physical behavior of the coma, the gaseous cloud that surrounds the nucleus of the comet.

Questions we hope to answer include: What gases are released by the nucleus? What is their chemical composition? How are they altered by sunlight and radiation? Because this comet is so close to Earth, we get to study the inner part of the coma. This allows us to directly compare our results to the detailed measurements done by the Rosetta mission that closely orbited comet 67P/Churyumov-Gerasimenko for two years. Wirtanen really is a space mission in reverse!

I love my work on comets because I get to combine lab work, space telescope observations, and space missions. The underlying story gets complicated quickly but is incredibly exciting when it all comes together.