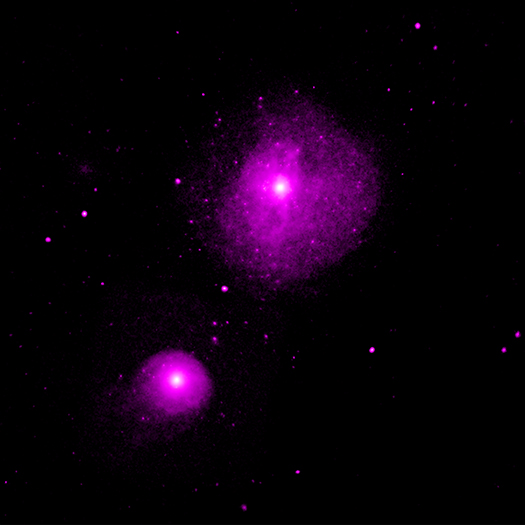 This image from NASA's Chandra X-ray Observatory shows the region around NGC 1399 and NGC 1404, two of the largest galaxies in the Fornax galaxy cluster. Located at a distance of about 60 million light years, Fornax is one of the closest galaxy clusters to Earth. This relative proximity allows astronomers to study the Fornax cluster in greater detail than most other galaxy clusters.

A new study is an example of what can be achieved when telescopes like Chandra study the Fornax cluster for long periods of time. By combining 15 days' worth of Chandra observing of Fornax spread out between 1999 and 2015, astronomers discovered that pairs of stars had been expelled the galaxies in the cluster.

Astronomers refer to pairs of stars orbiting around each other as a "binary" or "binary system." These stellar pairs can consist of combinations of stars like our Sun, or more exotic and denser varieties such as neutron stars or even black holes. Neutron stars form when a massive star explodes as a supernova and the core of the star collapses onto itself. Under certain conditions, these gargantuan blasts are not symmetric. The recoil caused by this asymmetry can kick the star with such force that it is expelled from the galaxy where it resides. These new Chandra results show that sometimes a neutron star's companion star is forced to exit the galaxy as well.

While this image shows point-like sources in addition to more diffuse X-ray emission detected by Chandra, it is not possible to identify which of these sources may be the expelled binaries. The reason for this is that the authors employed a statistical methodology to determine that 30 out of the nearly 1,200 X-ray sources, associated with 29 galaxies in the Fornax cluster, were likely to be pairs of stars that had been kicked out of the center of their host galaxies.

In addition to these banished X-ray binaries, the researchers found about 150 other sources located outside the boundaries of the galaxies observed by Chandra. One possible explanation for these sources is that they reside in the halos, or far outer reaches, of the Fornax cluster’s central galaxy, where they were formed. Another option is that they are X-ray binaries that were pulled away from a galaxy by the gravitational force of a nearby galaxy during a flyby, or X-ray binaries left behind as part of the remnants of a galaxy stripped of most of its stars by a galactic collision. Such interactions are expected to be relatively common in a crowded region like the one in the Fornax cluster.

A paper describing these results appears in the May 1st, 2019 issue of The Astrophysical Journal and is available online. The authors of the paper are Xiangyu Jin, Meicun Hou, Zhenlin Zhu, and Zhiyuan Li of Nanjing University in China. NASA's Marshall Space Flight Center in Huntsville, Alabama, manages the Chandra program for NASA's Science Mission Directorate in Washington. The Smithsonian Astrophysical Observatory in Cambridge, Massachusetts, controls Chandra's science and flight operations.