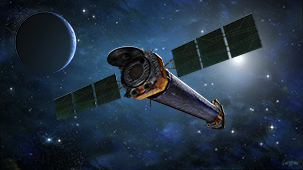 We make progress in astrophysics in a variety of ways. There is the sort that starts along a defined path, driven by meticulous proposals for telescope time or detailed science justifications for new missions. The plan is to advance knowledge by traveling further than others, or clearing a broader path. And then there are others.

A big mission like NASA's Chandra X-ray Observatory begins with plans for investigation along a slew of different directions and lines of study. At the time of Chandra's launch on July 23rd, 1999, scientists thought these paths would mainly follow studies of galaxy clusters, dark matter, black holes, supernovas, and young stars. Indeed, in the last 20 years we've learned about black holes ripping stars apart (reported eg in 2004, 2011 and 2017), about a black hole generating the deepest known note in the universe, about dark matter being wrenched apart from normal matter in the famous Bullet Cluster and similar objects, about the discovery of the youngest supernova remnant in our galaxy, and much more.

Progress in astrophysics can also be made when new paths of study suddenly open up. Three outstanding examples for Chandra are studies of gravitational wave events, dark energy and exoplanets. None of these fields existed before Chandra was conceived or built, but have now delivered some of our most exciting results. 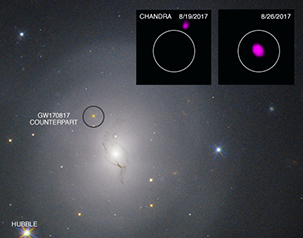 The newest example is the study of X-rays produced by the aftermath of gravitational wave events. In 1999 the detection of gravitational waves seemed like a distant or even impossible goal for many astronomers. But the LIGO scientists kept improving their remarkably sensitive observatory until September 2015, when they detected a burst of gravitational waves from the merger of two black holes. Two black holes that merge are not expected to produce electromagnetic radiation, but the mergers of two neutron stars are. That is exactly what was as observed for the first time in August 2017 with LIGO and a slew of telescopes. A Chandra observation two days after the merger failed to make a detection, but about a week later a source was discovered. These and additional observations taught us about the behavior and orientation of the jet that the neutron star merger produced.

The interest in this X-ray detection was so intense that there was a race between three different teams to publish the early Chandra observations first. This was accompanied by a rush to publicly announce the full set of results from LIGO and telescopes across the electromagnetic spectrum, before too many smart science writers dug out the news from Twitter and other publicly available information. 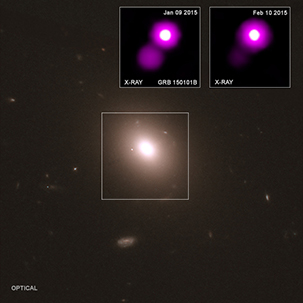 Release: All in the Family: Kin of
Gravitational-Wave Source Discovered

Chandra detections of two likely neutron star mergers have been reported since August 2017 (in 2018 and 2019). These did not involve a detection of GWs, both because Advanced LIGO wasn't yet operating, and because the events were likely too distant to be detectable even if it was. When Advanced LIGO and Virgo detect other neutron star mergers, and optical telescopes track them down, Chandra "Target of Opportunity" programs will kick in to study them. (TOOs, as they are called, are special cases made by scientists to interrupt the regularly scheduled observations in favor of one that is time sensitive and/or extremely important.) One is a large proposal and collaboration between three different teams, one aims to take a spectrum, another aims to observe a relatively nearby event, and a fourth involves joint observations with the VLA.

Those who work on Chandra and many in the wider science community were very excited about this detection because it marked the first time that gravitational waves and electromagnetic radiation were observed together, as a new type of "multi-messenger" astrophysics. (Multi-messenger astrophysics involves at least two of the following messengers: electromagnetic radiation, gravitational waves, neutrinos and cosmic rays.) However, it did not represent the first instance of multi-messenger astrophysics, because both electromagnetic radiation and neutrinos had already been observed from the Sun and from Supernova 1987A. Chandra may have already got into the act with the observation of a flare from material very close to the supermassive black hole in the center of our Galaxy, as reported in 2014. An energetic neutrino observed with the IceCube detector may have originated from this flare.

Another exciting new line of study has come from the discovery that the expansion of the universe is accelerating. The two key papers providing the first evidence for this surprising result were published in 1998 and 1999, just before Chandra launched. Both papers used distance measurements to supernova explosions over the last 5 billion or so years to follow the expansion. Since then a set of different techniques have been used to independently confirm and extend these results, including two involving Chandra observations of galaxy clusters. In one of them the distances to galaxy clusters were used to probe the expansion rate of the universe and another involved measuring the effects of accelerating expansion in slowing down the growth rate of galaxy clusters, in a type of cosmic arrested development. As explained in this article, if it wasn't for accelerating expansion the universe would look very different from how it looks today.

The work measuring the growth rate of galaxy clusters has led to independent tests of Einstein's General Theory of Relativity over distances that are much greater than those of Earth-orbiting satellites. The confirmation of GR has added to the evidence that a mysterious force called "dark energy" is causing cosmic acceleration. 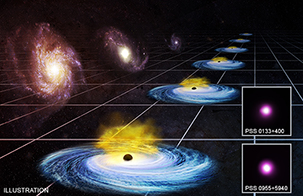 More recently, Chandra is being used with a new technique to probe cosmic expansion out to greater distances than are possible with supernova data. Astronomers have found tentative evidence that dark energy might be strengthening with time, but this result needs to be confirmed with more extensive use of Chandra data, a study that is currently underway, and independent work.

The recently-launched European mission eROSITA will be taking a sensitive X-ray survey of the complete sky and will discover a huge number of galaxy clusters for follow-up studies of both dark energy and dark matter with Chandra. 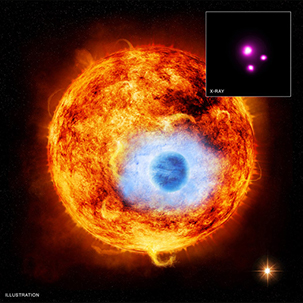 Many think the field of exoplanets studies started in 1995 with the detection of a hot Jupiter around the star 51 Pegasus, acclaimed as the first exoplanet discovered around a Sun-like star. (This was about the time that the grinding and polishing of Chandra's grazing-incidence mirrors was completed.) Chandra observations have shown cases of the tail wagging the dog, where a planet is affecting the star it is orbiting, in one case by making the star appear unusually old, and in others causing it to behave like a much younger star, as reported in 2011 and 2013.

Chandra observations have uncovered multiple examples of planets under assault by outside forces. They've found cases where radiation from the host star is evaporating the atmosphere of a close-in planet (from 2011 and 2013), where the powerful gravity of a white dwarf may have ripped a planet apart, a case of possible stellar or planetary cannibalism, and a case where a star may be devouring a young planet. Chandra data was also used to show that young stars much less massive than the Sun can unleash a torrent of X-ray radiation that may significantly shorten the lifetime of planet-forming disks surrounding these stars.

We look forward to reporting more results in these three new fields, along with discoveries from X-ray astronomy's traditional specialities. We also hope to see new fields appear, for fresh exploration with NASA's premier X-ray mission.

Category:
General
Tags:
anniversary
Disclaimer: This service is provided as a free forum for registered users. Users' comments do not reflect the views of the Chandra X-ray Center and the Harvard-Smithsonian Center for Astrophysics.
Please note this is a moderated blog. No pornography, spam, profanity or discriminatory remarks are allowed. No personal attacks are allowed. Users should stay on topic to keep it relevant for the readers.
Read the privacy statement