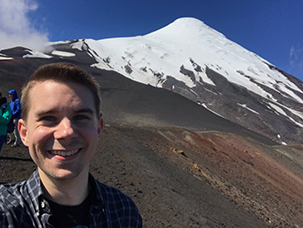 We welcome Ryan W. Pfeifle as our guest blogger. He received his B.S. in Physics from George Mason University (GMU) in 2017, and then stayed at GMU to continue onto his Ph.D and work with his current advisor on colliding galaxies and active galactic nuclei (AGNs). He is currently a third-year graduate research assistant in the Department of Physics and Astronomy at GMU. His primary focus is the identification and characterization of dual and triple AGNs in advanced mergers in an effort to understand the relationship between galaxy mergers and black hole growth. He has two recently published papers, one on their dual AGN program (published in April and available here), and one that is the focus of this press release, published in the Astrophysical Journal and available here. In addition to his research work, he is a tour guide at the GMU observatory in Fairfax, VA.

Over the past several decades, we have come to understand that supermassive black holes (SMBHs), with masses in the range of one million to several billion times the mass of our own sun, reside at the centers of most massive galaxies. Not only do we see these SMBHs in nearby galaxies, we also see them in galaxies as early as a few hundred million years after the Big Bang! Astronomers are still struggling to explain how these massive black holes could grow to these immense sizes so quickly, but one possible explanation lies in the interactions between galaxies.

As recently as the 1970s, it was postulated that the collision of two galaxies — a ubiquitous occurrence in the Universe — could induce gravitational torques which drive large volumes of gas and dust toward the centers of the galaxies, or the galaxy nuclei. Indeed, since then theorists have developed realistic models that demonstrate how these torques can funnel gas and dust into the vicinity of the black holes, potentially feeding and growing these giants in the galaxy nuclei. A SMBH that is actively consuming, or accreting, material is known as an active galactic nucleus (AGN), and the accretion activity of AGNs gives rise to emission across the entire electromagnetic spectrum (that is, different kinds of light). Thus, in order to find these gigantic black holes, we must look for light emitted by the material they are consuming.

Recent simulations by our co-author, Prof. Laura Blecha of the University of Florida, have shown that the fastest and largest amount of SMBH growth during a galaxy merger should occur in the latest stages of the merger, when the galaxy nuclei are within about 30,000 light years of one another. During this critical merger stage, the SMBHs in the galaxy nuclei should both light up as AGNs, becoming a so-called "dual AGN"; therefore, if we can find dual AGNs, we can find black holes that are experiencing their most rapid growth.

However, this rapid growth is a double-edged sword: the vast inflow of material spiraling toward the AGN can actually also block, or "obscure," the light emitted from the AGN, masking the accretion signatures. While dual AGNs are a seemingly natural consequence of galaxy mergers, they are incredibly rare — with only about 30 robustly identified throughout the Universe — and we think this is due to the high levels of obscuration (that is, blocked by gas and dust) masking them from our view. In order to better study these systems, we must employ new techniques that are motivated by these models to identify these obscured dual AGNs.

When I started my PhD at George Mason University in the summer of 2017, identifying dual AGNs in late-stage mergers was a prime focus for my research group. Prior to my involvement, my group had culled a large volume of galaxy mergers — classified through the Galaxy Zoo Project — and employed a novel pre-selection strategy, motivated by Prof. Blecha's work: they searched for galaxy mergers 1) with nuclear pair separations of 30,000 light years or less and 2) that are glowing intensely at mid-infrared wavelengths detected by NASA's Wide-Field Infrared Survey Explorer (WISE). Prof. Blecha's simulations predicted that during the dual AGN phase, the material surrounding the SMBHs should emit strongly in the mid-infrared wavelengths of light — which passes through obscuring gas and dust with greater ease than shorter wavelengths, such as visible light — and so this sample would be the first to test her proposed search in mid-infrared wavelengths for dual AGNs in galaxy mergers. My group followed-up on the 15 brightest galaxy mergers in the sample to search for these elusive dual AGNs using NASA's Chandra X-ray Observatory in orbit and the Large Binocular Telescope (LBT) in Tucson, Arizona. Their pilot study of the first six mergers was published in the Astrophysical Journal and can be found here.

I was tasked with the analysis of the X-ray data taken by Chandra. X-ray photons are emitted very near to the SMBHs during the accretion process and are therefore excellent tracers of AGN activity; in the case of dual AGNs, one could expect to find dual X-ray sources, one for each nucleus. Sure enough, Chandra revealed dual nuclear X-ray sources in several of the mergers within our sample, and through our near-infrared observations at LBT we were able to determine that in nearly every merger the X-ray sources were too bright to be explained by star formation activity — strongly suggesting that we were observing accretion signatures of dual AGNs! Our paper, published in the Astrophysical Journal, is available here. If this was not exciting enough, you can imagine my surprise when I realized one of the mergers, a system designated SDSS J0849+1114, actually exhibited three X-ray sources; this galaxy merger would become the focus of a two-year obsession of mine. How could this be? We were only expecting two X-ray sources at most! 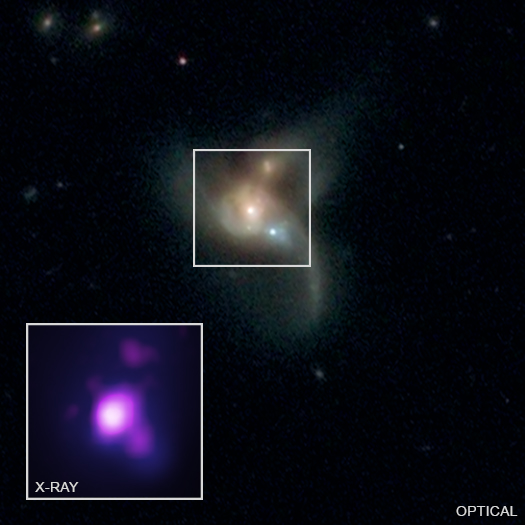 A merger of two galaxies actually lasts quite a long time, about 500-1000 million years or longer. If the timescale of a merger is sufficiently long, it is possible that one interacting pair of galaxies can encounter a third galaxy, leading to a triple galaxy merger. If the SMBHs at the centers of all three interacting galaxies happen to be simultaneously accreting material, it would be possible to spot three AGNs within the merger, giving rise to three nuclear X-ray sources! As if dual AGNs were not rare enough, not a single triple AGN in a late-stage merger has ever been confirmed in the literature. And while there are currently three candidates, none have been shown to exhibit three nuclear X-ray sources. When we selected our mergers, we chose systems with nuclei that were resolvable with Chandra but with no regard to the number of galaxies present. Did we really stumble upon a triple AGN using our mid-infrared preselection? We extended our investigation in order to understand the underlying nature of SDSS J0849+1114, acquiring data across two years from facilities such as LBT, NASA's Nuclear Spectroscopic Telescope Array (NuSTAR), which detects higher energy X-rays than Chandra, and the European VLBI network (EVN).

While Chandra revealed three nuclear X-ray sources which could not be explained by stellar activity, when combined with the NuSTAR observations we found that the brightest X-ray source in the system was enshrouded by gas and dust, as we expected from theory! Optical spectra, which give the amount of optical light at different wavelengths, from the LBT and the Sloan Digital Sky Survey (SDSS) had the characteristic optical signatures of obscured AGNs in all three nuclei. The spectra even revealed evidence for material being blown out and away from the AGNs, a phenomenon called an "outflow."

Outflows can have a profound impact on the host galaxy, possibly suppressing or enhancing star formation in the nuclei. Meanwhile, our LBT near-infrared spectroscopy revealed "smoking gun evidence" for AGN accretion activity — coincident with the brightest X-ray source in the system, confirming the AGN in that nucleus. Furthermore, we also observed a fingerprint of high velocity bulk motion of gas around a black hole in the LBT near-infrared spectra of two nuclei; these near-infrared observations were particularly important, as this bulk motion of gas was invisible to us in the optical spectra due to the obscuration along the line of sight! Finally, our EVN observations, discussed in a follow-up paper led by Dr. Krisztina Gabanyi and found here, revealed a powerful radio source, providing additional convincing evidence for accretion activity coincident with the brightest X-ray source. Using our arsenal of diagnostics, we ruled out obvious alternative scenarios, making this system the best case so far in the literature for a triple AGN in a late-stage merger. Our paper on SDSS J0849+1114 will be published presently in the Astrophysical Journal and can be found here.

Now, why are triple AGNs important? Dual AGNs can be thought of as the observational forerunner to gravitationally bound binary SMBHs, which are the result of the SMBHs "sinking" to the center of the merger and becoming bound to each other by gravity. These binary SMBHs should give rise to titanic gravitational wave signals as they spiral in toward one another, and such gravitational waves could be detectable by future space-based arrays. However, in realistic astrophysical environments, the inspiral of two SMBHs can actually stall once they are about three light years apart, a predicament known as the "Final Parsec Problem." (A parsec is a distance of about 3.3 light years.) At these separations there may not be any efficient means for the SMBHs to lose angular momentum, allowing them to finally coalesce to become one larger SMBH.

Theorists have recently shown, though, that interactions between a binary and a third SMBH can significantly reduce the amount of time for the SMBHs to spiral inwards, and thus aid in the coalescence of the binary! So, as with duals, we can think of triple AGNs as the observational forerunner of gravitationally bound triple SMBH systems. Furthermore, our observations suggest that triple AGNs may help drive some of the most transformative effects on their hosts. At much larger distances from Earth than SDSS J0849+1114, when the Universe was younger and galaxy interactions were much more frequent, one can expect that triple galaxy interactions were a common-place occurrence. Therefore, understanding triple AGNs like SDSS J0849+1114 in the local Universe may help us to understand the nature of their higher redshift counterparts.

It is very fitting that this discovery should come in the 20th year of Chandra's operation, as our work highlights the fantastic synergy between Chandra and other space-based and ground-based facilities, including LBT, WISE, NuSTAR, and SDSS. Additionally, the success of our observational program demonstrates the power of not only our mid-infrared selection strategy but also the importance of multiwavelength diagnostics in the search for dual and triple AGNs. Of course, this work could not have been possible without the dedication and expertise of my co-authors, to whom I am greatly indebted. We recently assembled a new sample of mid-infrared selected triple mergers using our preselection strategy, and we hope to extend our investigation and identify further cases of triple AGNs in mergers so that we can begin to understand them as a population.