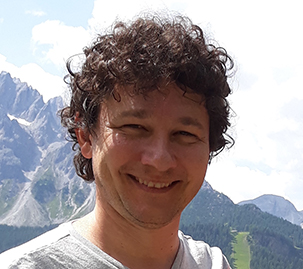 We are very happy to welcome Roberto Gilli as our guest blogger. Dr. Gilli is the first author of a paper that is the subject of our latest Chandra press release. He received his Ph.D. in astronomy from Firenze University in Italy in 2001. Afterward, he did a post-doctoral fellowship at The Johns Hopkins Observatory before returning to Firenze at the Arcetri Astrophysical Observatory. Today, he is an astronomer at the National Institute of Astrophysics (INAF) in Bologna, Italy, a position he has held since 2005. His research interests include active galactic nuclei, quasars, and deep X-ray surveys.

Black holes are usually perceived as dangerous, disruptive systems. On the one hand they swallow copious amount of matter. On the other, they release a large amount of energy in the form of both radiation and matter when enormous quantities of material fall onto them.

The most extreme manifestation of such phenomenon is known as a "quasar" or an "active galactic nucleus" (AGN) that are powered by growing supermassive black holes (SMBHs) at galaxy centers. During these growth phases, part of the gravitational energy of the infalling gas is converted into strong electromagnetic radiation. Meanwhile, some of the gas, rather than being swallowed by the black hole, is instead accelerated and pushed very far away in the form of fast winds or even faster jets that can approach the speed of light.

As astronomers, we often say that feeding a black hole is like feeding a baby. For each spoon of food that gets in, there is another one (or maybe two) getting out. Yet, the analogy has some limitations: the scales are not the same. In other words, we fortunately do not see babies sending food to the Moon and beyond as we would if they had the same relative reach of black holes!

We think that the huge release of energy produced by AGNs has severe consequences on the evolution history of their host galaxies. For instance, we believe that the ejected particles and radiation can heat or even expel the cool gas — from which stars form — from the galaxy. Either way, the net effect is that AGNs may effectively quench star formation and lead to what we call "red and dead galaxies," where the only gas left is hot and difficult to compress to make new stars. This process is widely known as "negative feedback." Scientists often advocate this idea to explain why we don't see many galaxies that have stars with masses equaling a thousand billion solar masses or so.

While observational (yet indirect) evidence for such negative AGN feedback has often been reported, some colleagues have realized that the ejection of matter from a SMBH may not be so dreadful and instead bring new stars to life. The idea is that the winds ejected from the nucleus may compress the clouds of cool, molecular gas that make most of the interstellar medium (that is, the gas in between the stars). As the density of the cool gas increases, the gravitational collapse of the clouds accelerates, leading to a quick ignition of new stars. The net effect in these cases would then be to boost star formation, which is known as "positive feedback."

Only very few examples of positive feedback have been reported so far, and all of them refer to modest star formation enhancements within the SMBH host galaxy, or, at most, in a close companion galaxy. During these active phases, the gas outflows produced by the AGN may indeed extend well beyond its host and even push matter several millions of light years away in the case of the most powerful jets (we would find baby food on Mars in this case).

What is exceptional with the system we discovered (as reported in a new press release) is that we may have seen for the first time an AGN producing strong positive feedback simultaneously on multiple galaxies a million light years away from it. This discovery was made possible by the combination of excellent data from different great international observatories including the Very Large Telescope in Chile, the Large Binocular Telescope in Arizona, the Jansky Very Large Array in New Mexico and, of course, the orbiting Chandra X-ray Observatory. 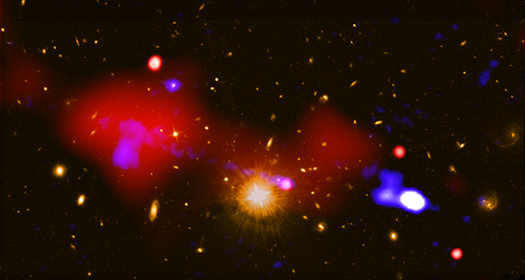 It was indeed a fortunate coincidence that the system we discovered is in the same field of view containing a very famous and distant quasar that has been intensively observed with Chandra. This very distant quasar, named SDSS J1030+0524, was one of the very first quasars known to shine when the Universe was less than a billion years old. In fact, we have studied both this quasar and its environment in the hope of finding other companion galaxies and AGN to SDSS J1030+0524, as theory indicates that these early SMBHs form in densely populated regions of the Universe.

To our surprise, we discovered in the same field another distant, yet closer, very powerful AGN that is surrounded by several companion galaxies. This object was known from past observations in the radio band to be a "Fanaroff-Riley type II radio-galaxy" (FRII). This a class of AGN that launch powerful jets of matter terminating in lobes filled by high-speed particles that emit in the radio band. We measured the distance to us of this FRII as well as the distance of other galaxies in the field and discovered that, together with seven highly star-forming galaxies, the FRII is part of a large-scale structure that will likely evolve into a massive galaxy cluster.

Our deep Chandra observations revealed that the AGN powering the FRII is heavily hidden by large amounts of dust and gas. This result was good but somewhat expected, since the nuclei of FRII radio galaxies are often obscured. Our surprise and excitement, however, increased when we discovered a diffuse glow of X-rays that was aligned with the radio jet and realized that the brightest spot of diffuse X-ray emission was located around the radio lobe of the FRII towards the left of the black hole.

Our interpretation is that the jet launched by the AGN has collided with denser gas a million light years away in the forming galaxy cluster. This collision has produced an enormous shock wave that rapidly propagates through the cluster and is made by a shell of cold gas (invisible to our instruments) around a bubble filled by very hot gas (tens of millions kelvin), that, in contrast, is bright in the X-rays that Chandra detects.

This would have been a great result in itself, as no such diffuse X-ray glow was ever seen around a distant radio galaxy. But this was not the end. Four of the seven star-forming companion galaxies of the FRII were located right at the edge of the X-ray expanding bubble. We immediately realized that the probability of such a chance alignment was negligible and hence took this coincidence quite seriously.

We thought: well, suppose these galaxies are being hit the shock wave, the compression of their interstellar medium may accelerate star formation. If so, they should have higher star formation rates than the rest of their companion galaxies in the cluster, and, in general, higher than that of similar galaxies, i.e. galaxies with similar mass at the same cosmic epoch.

This is exactly what we found. The four star-forming galaxies at the edge of the X-ray bubble are churning out new stars at rates that are from two to five times higher than their companions and also than what is normally observed in a control sample of field galaxies. For us, this was closing the circle, and we could conclude that we had observed for the first time a SMBH helping many galaxies in its neighborhood to grow and form stars.

These observations pave the way for a new understanding of how SMBHs regulate not only the life of their host galaxies, but also of their whole neighborhoods. We are now intensively observing this structure with other astronomical facilities such as the Atacama Large Millimeter Array, and, for instance, we are already discovering other highly star forming galaxies in the same cosmic structure.

We remark that it is only because of our extremely deep Chandra observation that it was possible to establish a connection between the energy released by the black hole and the enhanced star formation rates measured in some of its companion galaxies. We already started observing a famous system similar to this one, nicknamed the Spiderweb protocluster, with an even longer Chandra exposure.

By the middle of 2020, Chandra will reveal whether the growing SMBH at the center of the Spiderweb is also helping star formation, adding to our result. If so, Chandra will prove that SMBHs have a fundamental role in shaping entire, large scale cosmic structures. This is our way to celebrate Chandra's 20th anniversary and acknowledge once again Riccardo Giacconi (or, simply, Riccardo) for his vision and heritage that ultimately led to the unrivalled capabilities of the Chandra X-ray Observatory.