This week, many Americans will celebrate the 4th of July by enjoying fireworks. We love to see the explosion, followed by the colorful debris field as it expands and rains down from the sky. And, fireworks are often slightly different from one another — even if they originate from the same type of explosion. Of course, if they have different types or proportions of chemicals before in the explosive itself, the fireworks can look dramatically different. And, don't forget that the environment they explode into — include wind or clouds of smoke — can affect how they look.

The interesting thing is this it is a similar situation when it comes to the cosmic fireworks known as supernovas. When some stars run out of their nuclear power source in their cores, the star collapses. (This is one type of supernova explosion, but there's not the only one.) In less than a second, a neutron star or a black hole is formed, and a colossal amount of energy is released. All but that central dense object is blown away at speeds of over 30 million miles per hour! A shock wave then races through the expanding stellar debris field and fuses lighter elements into heavier ones. This produces a brilliant outburst that can be as intense as the light of several billion Suns. 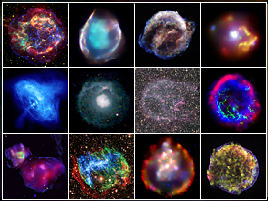 So after this explosion happens, it's time for the debris field to become — pardon the pun— the star of the show. The rapidly expanding debris crashes into gas that was in the star's neighborhood. This collision creates a supernova remnant consisting of hot gas and high-energy particles that glow in radio through X-ray wavelengths for thousands of years. Chandra has observed many of these supernova remnants, and each is spectacular in their own way. The reasons for their differences can be very complicated, but maybe not so different than why terrestrial fireworks are. There could be different amounts or types of chemicals in the star before it exploded, and the environment that they expand into can also change their size and shape.

Just like the fireworks on the 4th, these supernova explosions and their remnants can grab our attention and captivate our imagination. Whether the fireworks on Earth or across the Galaxy, they are certainly something to admire and enjoy.