How To Do Particle Physics With Chandra 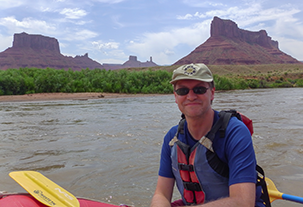 We are pleased to welcome Chris Reynolds as our guest blogger. Chris is a professor in the Institute of Astronomy at the University of Cambridge in the United Kingdom, and led the study that is the subject of our latest press release. He received his Bachelors degree in Physics and Theoretical Physics from the University of Cambridge in 1992, and continued in Cambridge to graduate with his PhD in astronomy in 1996. He then moved to the University of Colorado Boulder for five years as a post-doctoral fellow and Hubble Fellow, before joining the faculty of the University of Maryland's Department of Astronomy. In 2017, after 16 years as a professor at the University of Maryland, he was lured back to Cambridge to take up the position of Plumian Professor of Astronomy and Experimental Philosophy. Chris is a high-energy astrophysicist who mainly works on the properties of supermassive black holes, although he has taken a detour into particle physics with his latest work, which is the subject of this blog post.

A little over 200 million light years from us lies the Perseus cluster, a swarm of a thousand galaxies trapped within the space of just a couple of million light years by the gravitational field of a massive ball of dark matter. This gravitational field doesn't just confine the galaxies. It also holds onto an atmosphere of hot (40-60 million Kelvin) gas that fills the space between the galaxies; this matter is known as the “intracluster” medium. At the center of all of this lies the unusual galaxy NGC1275, and at the center of this galaxy is a supermassive black hole that is driving powerful jets out into the intracluster medium. When my team observed the active galactic nucleus (AGN) in NGC1275 with the Chandra X-ray Observatory in late 2017, we thought that our focus would be the properties of this black hole and how it interacted with its surroundings. Little did we know that we'd be publishing a paper on particle physics, setting the tightest limits to date on light axion-like particles with implications for string theory!

So what are axions and axion-like particles, what did we actually do, and why should anyone care? One of the defining successes of 20th Century physics is the formulation of what scientists refer to as the Standard Model of Particle Physics, a mathematically self-consistent theory that accurately describes all known non-gravitational physics. But we know that this cannot be the final theory. For a start, it doesn't include gravity, and attempts to "glue-together" the Standard Model with Einstein's General Theory of Relativity (our current best description of gravity) seem to be doomed to fail.

The Standard Model also leaves us with some puzzles, with one of the most profound being the so-called "Strong CP problem". Experimentally, we know that one of the forces described by the Standard Model, the strong nuclear force (which holds the particles together to form the nucleus of an atom) acts in exactly the same manner if we were to flip the sign of the charges (“C”) of all of the particles involved at the same time that we flip the parity (“P”) of the distribution of charges (i.e., take a mirror image of the distribution). The problem is that, mathematically, there is no reason why the strong force should obey this “CP rule”! This was recognized in the 1970s, prompting Roberto Peccei and Helen Quinn to develop an extension to the Standard Model that naturally enforces the CP rule. It was quickly realized by Frank Wilczek and Steven Weinberg that the Peccei-Quinn mechanism predicted the existence of a new kind of particle which they named the axion (in honor of the washing detergent, since they cleanse the theory of the Strong CP problem).

Physicists strive to "break" the Standard Model in order to learn deeper truths and eventually uncover the “Theory of Everything,” so the prediction of new particles that can be hunted for experimentally is really important. One of the best candidates for the Theory of Everything is string theory where the notion of point-like particles is replaced by little strings and string loops. The mathematics of string theory is fearsome, and, in fact, it is not yet possible to conduct calculations in a “realistic” string theory that describes our real Universe. One thing that is clear, however, is that string theory generically predicts large numbers of particles that have the same basic properties as the axions of Wilczek and Weinberg; these are the axion-like particles (or ALPs for short). This connection to string theory, together with physicists’ increasing desperation to find particles that might make up the dark matter that holds galaxies and galaxy clusters together, has led to a huge surge of recent interest in axions and ALPs.

Both axions and ALPs have an interesting property that can be used to find them. An ALP travelling through a magnetic field can convert into a photon, that is a packet of light. The converse is also true: a photon passing through a magnetic field can convert into an ALP. The probability for this conversion depends upon the strength of the magnetic field, the distance travelled, the mass of the ALP (string theory tends to predict very low mass ALPs), and an unknown parameter of the theory known as the photon-ALP coupling constant. This coupling constant is a measure of the particle’s “convertibility”.

This is where my team enters the picture. After dedicating about eight days of observing time with Chandra to produce a high-resolution X-ray spectrum -- that is, the amount of X-ray emission over a range of energies -- of the AGN in NGC1275, we obtained one of the most boring spectra I’ve ever seen. It was (almost) devoid of any features that could be used to study the supermassive black hole. But as the saying goes, when life gives you lemons make lemonade. We realized that these same data had a lot to say about particle physics, and in particular ALPs! The X-ray light from NGC1275 needs to pass through the hot gas of the Perseus cluster, and this gas is magnetized. The magnetic field is relatively weak (more than 10,000 times weaker than the magnetic field at the Earth’s surface), but the X-ray photons need to travel an enormous distance through this magnetic field. This means there is ample opportunity for the conversion of these photons into ALPs (provided that the ALPs are sufficiently low mass).

The theory tells us that the conversion probability depends upon the energy, or wavelength, of the X-rays, so any ALP conversion would distort the spectrum as certain wavelengths were converted more effectively than others. This basic idea was not new, and had been tried with other datasets by others (Denis Wouters, Pierre Brun, and Joe Conlon as well as members of my team Helen Russell and David Marsh). But through the use of the Chandra diffraction gratings and some tailored data analysis, the quality of our NGC1275 spectrum much exceeded those available previously.

Superior data required superior modelling efforts and very careful statistics – about a year’s worth of work – but the result was the best limit to date on the photon-ALP coupling constant for low-mass ALPs. We managed to push down by a factor of three the previous value of the maximum allowable photon-ALP coupling. Even in isolation, this is very cool and highlights the power of astronomical observations to study fundamental physics. But soon after putting the paper describing our results on the arXiv (the online repository that astronomers and astrophysicists use to share research papers), James Halverson, Cody Long, Brent Nelson and Gustavo Salinas of Northeastern University in Boston, Massachusetts, wrote a paper reporting calculations of some “toy” string theory models and showed that our Chandra results are already starting to challenge and rule out some string theory predictions. The fact that Chandra can help physicists navigate the large landscape of various versions of string theory is extremely exciting. It also raises the tantalizing possibility that future X-ray observations, either by Chandra or its successors, could reveal the existence of these particles and signpost the next revolution in fundamental physics.

For context, Cody Long provided independent comments on the new work: The results of Chris Reynolds et. al. using data from the Chandra X-ray Observatory give a particularly promising and exciting prospect of probing a large number of different string theories. There is mounting evidence that a significant fraction of these theories should contain many light axions, some of which will convert into photons, or vice versa. Such conversions are potentially observable. Our recent work showed that the chances of such conversions occurring can grow quickly with the number of axions. These new observational constraints may therefore be particularly powerful for testing theories with a large number of axions, which encompass the vast majority of known string theories.

Category:
Black Holes
Groups & Clusters of Galaxies
Cosmology/Deep Field
Disclaimer: This service is provided as a free forum for registered users. Users' comments do not reflect the views of the Chandra X-ray Center and the Harvard-Smithsonian Center for Astrophysics.
Please note this is a moderated blog. No pornography, spam, profanity or discriminatory remarks are allowed. No personal attacks are allowed. Users should stay on topic to keep it relevant for the readers.
Read the privacy statement