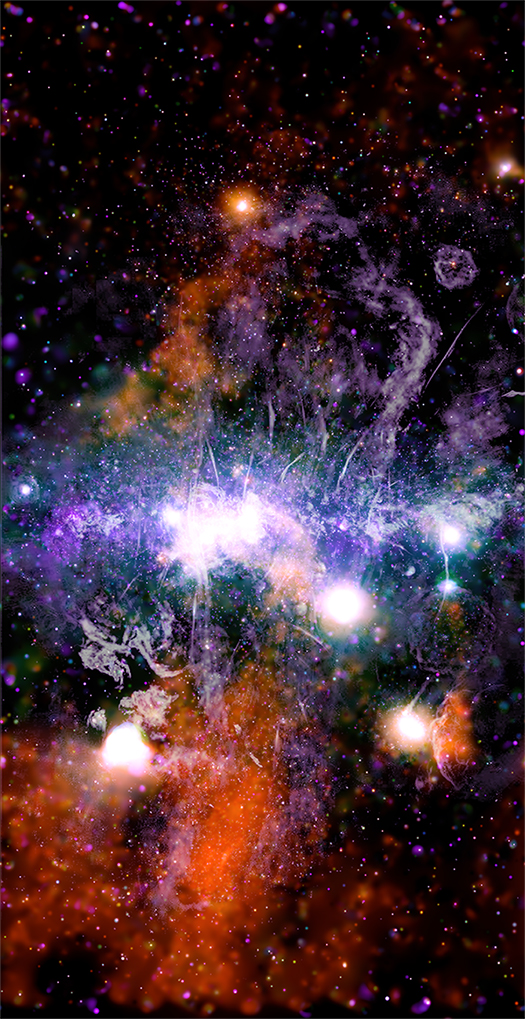 Threads of superheated gas and magnetic fields are weaving a tapestry of energy at the center of the Milky Way galaxy. A new image of this new cosmic masterpiece was made using a giant mosaic of data from NASA's Chandra X-ray Observatory and the MeerKAT radio telescope in South Africa.

The new panorama of the Galactic Center builds on previous surveys from Chandra and other telescopes. This latest version expands Chandra's high-energy view farther above and below the plane of the Galaxy — that is, the disk where most of the Galaxy's stars reside — than previous imaging campaigns. In the image featured in our main graphic, X-rays from Chandra are orange, green, blue and purple, showing different X-ray energies, and the radio data from MeerKAT are shown in lilac and gray. The main features in the image are shown in a labeled version.

One thread is particularly intriguing because it has X-ray and radio emission intertwined. It points perpendicular to the plane of the galaxy and is about 20 light years long but only one-hundredth that size in width.

A new study of the X-ray and radio properties of this thread by Q. Daniel Wang of the University of Massachusetts at Amherst suggests these features are bound together by thin strips of magnetic fields. This is similar to what was observed in a previously studied thread. (Both threads are labeled in the image. The newly studied one is in the lower left and is much farther away from the plane of the Galaxy.) Such strips may have formed when magnetic fields aligned in different directions, collided, and became twisted around each other in a process called magnetic reconnection. This is similar to the phenomenon that drives energetic particles away from the Sun and is responsible for the space weather that sometimes affects Earth.

A detailed study of these threads teaches us more about the Galactic space weather astronomers have witnessed throughout the region. This weather is driven by volatile phenomena such as supernova explosions, close-quartered stars blowing off hot gas, and outbursts of matter from regions near Sagittarius A*, our Galaxy's supermassive black hole.

Magnetic reconnection events may play a major role in heating the gas existing between stars (the interstellar medium). This process may also be responsible for accelerating particles to produce cosmic rays like those observed on Earth and driving turbulence in the interstellar medium that triggers new generations of star birth.

The image shows that the magnetic threads tend to occur at the outer boundaries of the large plumes of hot gas. This suggests that the gas in the plumes is driving magnetic fields that collide to create the threads.

The paper by Wang describing these results appears in the June issue of the Monthly Notices of the Royal Astronomical Society, and a preprint is available online. NASA's Marshall Space Flight Center manages the Chandra program. The Smithsonian Astrophysical Observatory's Chandra X-ray Center controls science from Cambridge, Massachusetts, and flight operations from Burlington, Massachusetts.

Category:
Milky Way Galaxy
Normal Galaxies & Starburst Galaxies
Disclaimer: This service is provided as a free forum for registered users. Users' comments do not reflect the views of the Chandra X-ray Center and the Harvard-Smithsonian Center for Astrophysics.
Please note this is a moderated blog. No pornography, spam, profanity or discriminatory remarks are allowed. No personal attacks are allowed. Users should stay on topic to keep it relevant for the readers.
Read the privacy statement