The Jellyfish Nebula, also known by its official name IC 443, is the remnant of a supernova lying 5,000 light years from Earth. Chandra X-ray observations show that the explosion that created the Jellyfish Nebula may have also formed a peculiar object located on the southern edge of the remnant, called CXOU J061705.3+222127, or J0617 for short. The object is likely a rapidly spinning neutron star, or pulsar.

When a massive star runs out of thermonuclear fuel, it implodes, forming a dense stellar core called a neutron star. The outer layers of the star collapse toward the neutron star then bounce outward in a supernova explosion. A spinning neutron star that produces a beam of radiation is called a pulsar. The radiation sweeps by like a beacon of light from a lighthouse and can be detected as pulses of radio waves and other types of radiation. 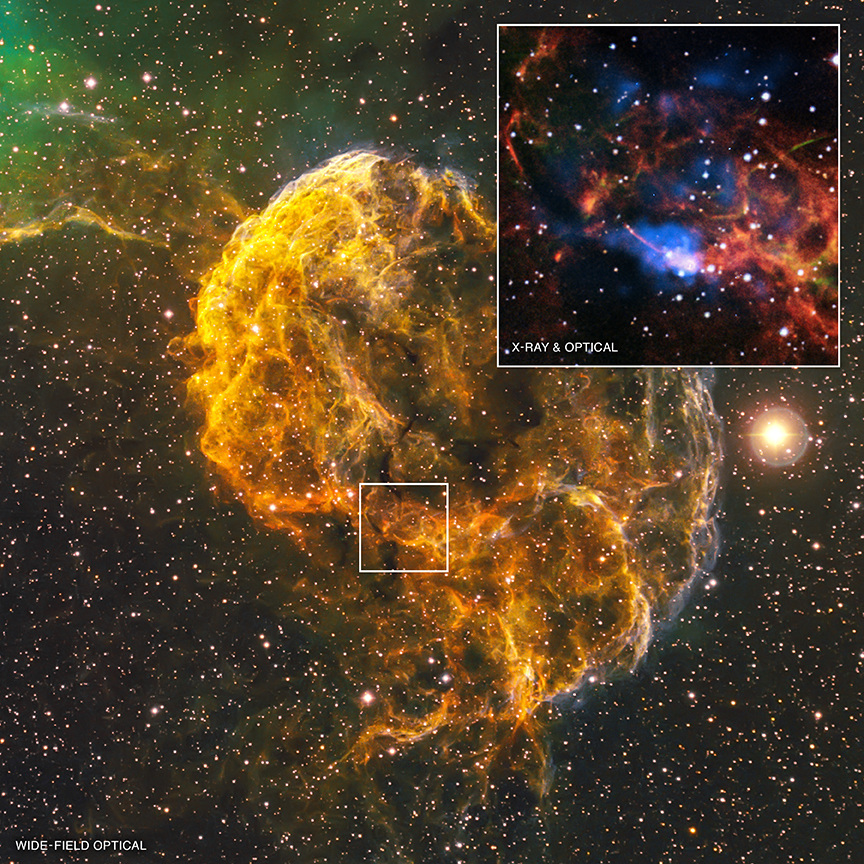 A composite image includes a wide-field view from an astrophotographer that shows the spectacular filamentary structure of IC 443. Within the inset box, another optical image from the Digitized Sky Survey (red, green, orange, and cyan) has been combined with X-ray data from Chandra (blue). The inset shows a close-up view of the region around J0617.

The Chandra image reveals a small, circular structure (or ring) surrounding the pulsar and a jet-like feature pointing roughly in an up-down direction that passes through the pulsar. It is unclear if the long, pink wisp of optical emission is related to the pulsar, as similar wisps found in IC 443 are unrelated to X-ray features from the pulsar. The ring may show a region where a high speed wind of particles flowing away from the pulsar is slowing down abruptly. Alternatively, the ring may represent a shock wave, similar to a sonic boom, ahead of the pulsar wind. The jet could be particles that are being fired away from the pulsar in a narrow beam at high speed.

The X-ray brightness of J0617 and its X-ray spectrum, or the amount of X-rays at different wavelengths, are consistent with the profiles from known pulsars. The spectrum and shape of the diffuse, or spread out, X-ray emission surrounding J0617 and extending well beyond the ring also match with expectations for a wind flowing from a pulsar.

This research points to an estimate for the age of the supernova remnant to be tens of thousands of years. This agrees with previous work that pegged IC 443's age to be about 30,000 years. However, other scientists have inferred much younger ages of about 3,000 years for this supernova remnant, so its true age remains in question.


This 3D model shows this stunning supernova remnant IC 443 in a new way. In the model, the shock wave (similar to a sonic boom produced by a jet) and the remains of the star have collided with a nearby gas cloud, and are interacting with it as they pass through it.

A comparison of the 3D model with X-ray data from ESA’s XMM-Newton shows that the collision of the shock wave and debris with the gas cloud is the main factor responsible for the unusually complex appearance of the X-ray emission from IC 443.

The 3D model also gives important information about the supernova explosion that formed IC 443. It shows that the explosion was weaker than most supernovas and that it occurred about 8,000 years ago, in Earth's time frame. In addition, this work provides new evidence that a source of X-rays discovered with Chandra (cyan in the inset image) contains the neutron star that formed when a massive star collapsed and exploded to create IC 443.

These 3D printable files were created by the Chandra team from the scientific 3D model, showing the ejecta in cross-section (printed here in blue (left), and also in white (right) with an option to color the point of the cutout for the pulsar wind nebula with a marker or nailpolish).

Select the 3D printer of your choice to make your own IC 443/Jellyfish nebula. Download the files below. For our 3D-printed example shown here, one color of PLA filament was used for each example model. If support structures are required, they can be removed after printing by using a dissolvable substrate with minimal hand-cleaning, or filed/sanded off.

With PWN Plus Torus
STL

LINKS TO OTHER ACTIVITIES

Astronomy
Make the Most of Your Universe
Learn more at chandra.si.edu/corps/

Developed by the Chandra X-ray Center, at the Smithsonian Astrophysical Observatory, in Cambridge, MA, with funding by NASA under contract NAS8-03060   |   Privacy  |  Accessibility