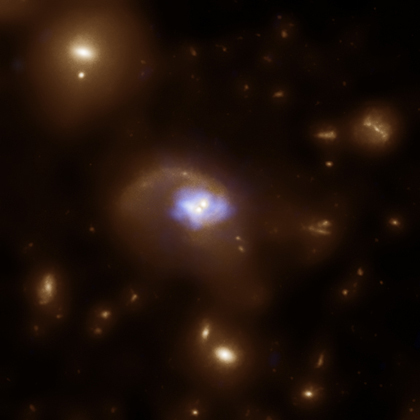 Evidence for a recoiling black hole has been found using data from the Chandra X-ray Observatory, XMM-Newton, the Hubble Space Telescope (HST), and several ground-based telescopes. A new paper reports that this black hole kickback was caused either by a slingshot effect produced in a triple black hole system, or from the effects of gravitational waves produced after two supermassive black holes merged a few million years earlier.

The discovery of this object, located in this composite image, comes from a large, multi-wavelength survey, known as the Cosmic Evolution Survey (COSMOS). This survey includes data from Chandra, HST, XMM-Newton, as well as ground-based observatories. Of the 2,600 X-ray sources found in COSMOS, only one -- named CID-42 and located in a galaxy about 3.9 billion light years away -- coincides with two very close, compact optical sources. In this image, the X-ray source detected by Chandra is colored blue, while the Hubble data are seen in gold. The two white sources near the center of the image are seen in the optical HST data, but they are too close for Chandra to resolve them separately.

The galaxy's long tail suggests that a merger between galaxies has occurred relatively recently, only a few million years earlier. Data from the Very Large Telescope and the Magellan telescope give evidence that there is a large difference in speed between the two optical sources of at least about three million miles an hour.