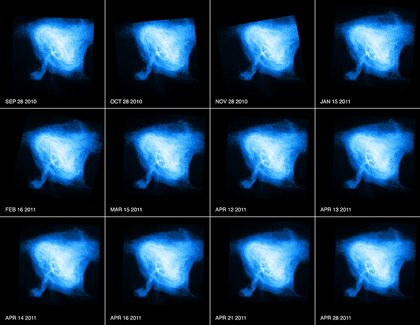 A new movie from NASA's Chandra X-ray Observatory shows a sequence of Chandra images of the Crab Nebula, taken over an interval of seven months. Dramatic variations are seen, including the expansion of a ring of X-ray emission around the pulsar (white dot near center) and changes in the knots within this ring.

However, arguably the most striking result of these observations is the variations that were not observed, or in analogy with a famous Sherlock Holmes story [footnote], this could be a case where the fact that the dog that did not bark helps to solve a mystery.

The pulsar at the center of the Crab Nebula is a neutron star that spins around about 30 times a second. It was created from a supernova explosion in our galaxy that was observed by astronomers in China and other countries in the year 1054.

As the young pulsar slows down, large amounts of energy are injected into its surroundings. In particular, a high-speed wind of matter and anti-matter particles plows into the surrounding nebula, creating a shock wave that forms the expanding ring seen in the movie. Jets from the poles of the pulsar spew X-ray emitting matter and antimatter particles in a direction perpendicular to the ring.

The goal of these latest Chandra observations was to pinpoint the location of remarkable gamma-ray flares observed by NASA's Fermi Gamma Ray Observatory and Italy's AGILE Satellite. A strong gamma-ray flare was observed from the Crab in September 2010, followed by an even stronger series of "superflares" in April 2011. The gamma-ray observatories were not able to locate the source of the flares within the nebula, but it was hoped that Chandra, with its high-resolution images, would.