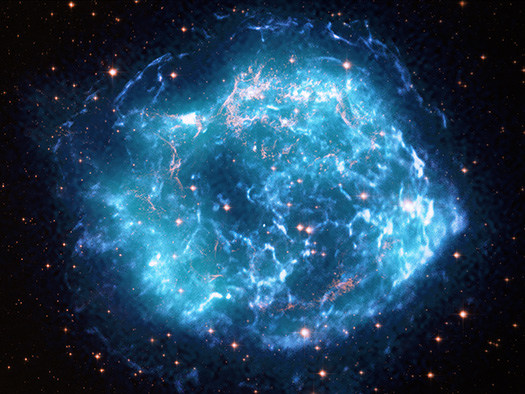 For the first time, astronomers have measured and mapped polarized X-rays from the remains of an exploded star, using NASA’s Imaging X-ray Polarimetry Explorer (IXPE). The findings, which come from observations of a stellar remnant called Cassiopeia A, shed new light on the nature of young supernova remnants, which accelerate particles close to the speed of light.

Launched on Dec. 9, 2021, IXPE, a collaboration between NASA and the Italian Space Agency, is the first satellite that can measure the polarization of X-ray light with this level of sensitivity and clarity.

All forms of light — from radio waves to gamma rays — can be polarized. Unlike the polarized sunglasses we use to cut the glare from sunlight bouncing off a wet road or windshield, IXPE’s detectors maps the tracks of incoming X-ray light. Scientists can use these individual track records to figure out the polarization, which tells the story of what the X-rays went through.

Cassiopeia A (Cas A for short) was the first object IXPE observed after it began collecting data. One of the reasons Cas A was selected is that its shock waves — like a sonic boom generated by a jet — are some of the fastest in the Milky Way. The shock waves were generated by the supernova explosion that destroyed a massive star after it collapsed. Light from the blast swept past Earth more than three hundred years ago. 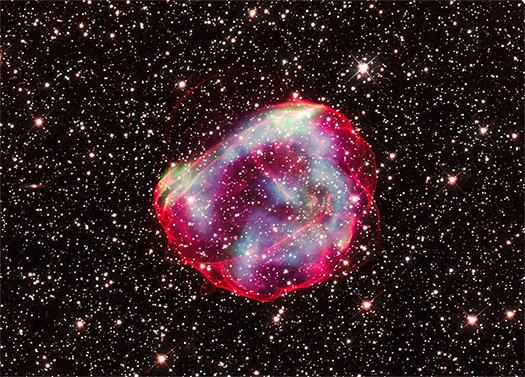 While astronomers have seen the debris from scores of exploded stars in the Milky Way and nearby galaxies, it is often difficult to determine the timeline of the star’s demise. By studying the spectacular remains of a supernova in a neighboring galaxy using NASA telescopes, a team of astronomers has found enough clues to help wind back the clock.

The supernova remnant called SNR 0519-69.0 (SNR 0519 for short) is the debris from an explosion of a white dwarf star. After reaching a critical mass, either by pulling matter from a companion star or merging with another white dwarf, the star underwent a thermonuclear explosion and was destroyed. Scientists use this type of supernova, called a Type Ia, for a wide range of scientific studies ranging from studies of thermonuclear explosions to measuring distances to galaxies across billions of light-years. 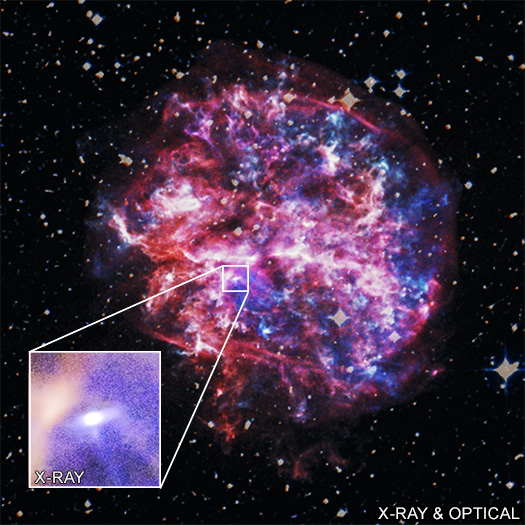 The G292.0+1.8 supernova remnant contains a pulsar moving at over a million miles per hour. This image features data from NASA's Chandra X-ray Observatory (red, orange, yellow, and blue), which was used to make this discovery, as discussed in our latest press release. The X-rays were combined with an optical image from the Digitized Sky Survey, a ground-based survey of the entire sky.

Pulsars are rapidly spinning neutron stars that can form when massive stars run out of fuel, collapse and explode. Sometimes these explosions produce a "kick," which is what sent this pulsar racing through the remains of the supernova explosion. An inset shows a close-up look at this pulsar in X-rays from Chandra.

To make this discovery, the researchers compared Chandra images of G292.0+1.8 taken in 2006 and 2016. A pair of supplemental images show the change in position of the pulsar over the 10-year span. The shift in the source's position is small because the pulsar is about 20,000 light-years from Earth, but it traveled about 120 billion miles over this period. The researchers were able to measure this by combining Chandra's high-resolution images with a careful technique of checking the coordinates of the pulsar and other X-ray sources by using precise positions from the Gaia satellite. 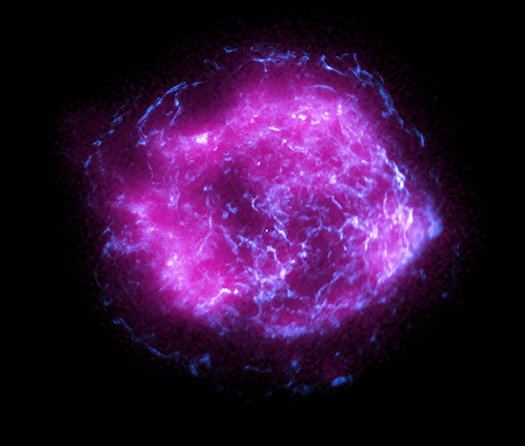 All instruments are functioning well aboard the observatory, which is on a quest to study some of the most mysterious and extreme objects in the universe.

IXPE first focused its X-ray eyes on Cassiopeia A (Cas A), an object consisting of the remains of a star that exploded in the 17th century. The shock waves from the explosion have swept up surrounding gas, heating it to high temperatures and accelerating cosmic ray particles to make a cloud that glows in X-ray light. Other telescopes, including Chandra, have studied Cas A before, but IXPE will allow researchers to examine it in a new way.

The newly-release image combines IXPE and Chandra data of Cas A. The saturation of the magenta color corresponds to the intensity of X-ray light observed by IXPE, which has been overlaid on high-energy X-rays, shown in blue, from Chandra. With different kinds of detectors, Chandra and IXPE have different levels of angular resolution, or sharpness. The IXPE data in this new image contain collected from Jan. 11 to 18, while the Chandra data come from observations over the 22-year mission thus far. 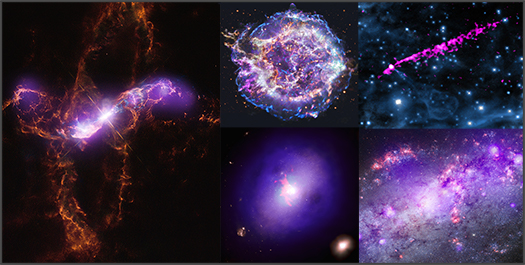 The recent launches of the James Webb Space Telescope (Webb) and the Imaging X-ray Polarimetry Explorer (IXPE) by NASA and its international partners are excellent reminders that the universe emits light or energy in many different forms. To fully investigate cosmic objects and phenomena, scientists need telescopes that can detect light across what is known as the electromagnetic spectrum.

This gallery provides examples of the ways that different types of light from telescopes on the ground and in space can be combined. The common thread in each of these selections is data from NASA's Chandra X-ray Observatory, illustrating how X-rays — which are emitted by very hot and energetic processes — are found throughout the Universe. 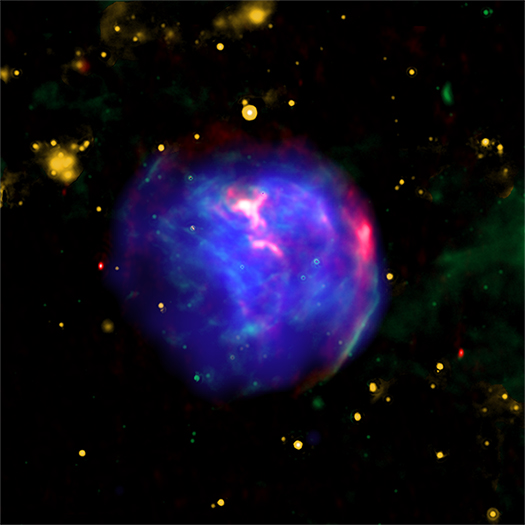 White dwarfs are among the most stable of stars. Left on their own, these stars that have exhausted most of their nuclear fuel — while still typically as massive as the Sun — and shrunk to a relatively small size can last for billions or even trillions of years.

However, a white dwarf with a nearby companion star can become a cosmic powder keg. If the companion's orbit brings it too close, the white dwarf can pull material from it until the white dwarf grows so much that it becomes unstable and explodes. This kind of stellar blast is called a Type Ia supernova.

While it is generally accepted by astronomers that such encounters between white dwarfs and "normal" companion stars are one likely source of Type Ia supernova explosions, many details of the process are not well understood. One way to investigate the explosion mechanism is to look at the elements left behind by the supernova in its debris or ejecta.

Motions of a remarkable cosmic structure have been measured for the first time, using NASA's Chandra X-ray Observatory. The blast wave and debris from an exploded star are seen moving away from the explosion site and colliding with a wall of surrounding gas.

Astronomers estimate that light from the supernova explosion reached Earth about 1,700 years ago, or when the Mayan empire was flourishing and the Jin dynasty ruled China. However, by cosmic standards the supernova remnant formed by the explosion, called MSH 15-52, is one of the youngest in the Milky Way galaxy. The explosion also created an ultra-dense, magnetized star called a pulsar, which then blew a bubble of energetic particles, an X-ray-emitting nebula. 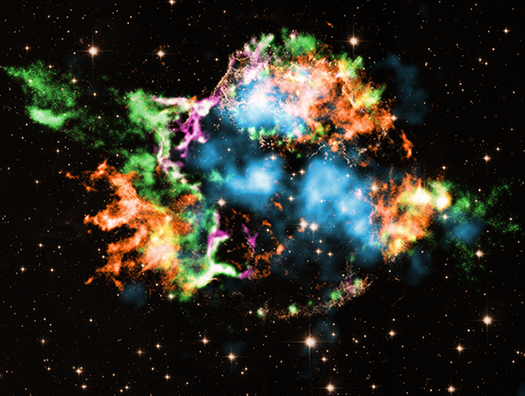 Astronomers using NASA's Chandra X-ray Observatory have announced the discovery of an important type of titanium, along with other elements, blasting out from the center of the supernova remnant Cassiopeia A (Cas A). This new result, as outlined in our latest press release, could be a major step for understanding exactly how some of the most massive stars explode.

The different colors in this new image mostly represent elements detected by Chandra in Cas A: iron (orange), oxygen (purple), and the amount of silicon compared to magnesium (green). Titanium (light blue) detected previously by NASA's NuSTAR telescope at higher X-ray energies is also shown. These Chandra and NuSTAR X-ray data have been overlaid on an optical-light image from the Hubble Space Telescope (yellow). 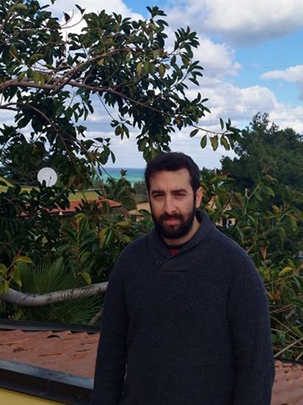 We are pleased to welcome Emanuele Greco as a guest blogger. Emanuele is the first author of a paper describing the possible discovery of a neutron star left behind by supernova 1987A. Emanuele received a master’s degree in Physics at the University of Palermo in 2017. He is now completing his PhD in Astrophysics at the same University, where he is expected to defend his thesis next June. He spent six months of his PhD at the Anton Pannekoek Instituut of the University of Amsterdam. Emanuele’s main research interests deal with the X-ray spectroscopy of supernova remnants and objects embedded within their shells, with a particular focus on the different processes that generate X-ray emission.

Imagine having a bright and small light bulb and putting it behind a thick wall made of elements like iron and silicon. No light stemming from the bulb would be observed, because it is completely obscured by the wall. This quite simple scenario is perfectly suited also for the elusive compact object of supernova (SN) 1987A, which was investigated by scientists from University of Palermo (UniPa), INAF-Observatory of Palermo (OAPa), Astrophysical Big Bang Laboratory (RIKEN) and University of Kyushu.

SN 1987A is the only naked-eye SN observed since telescopes were invented and offers a unique opportunity to watch a SN evolving into a supernova remnant (SNR) in this time of multi-wavelength and multi-messenger observatories simultaneously at work. This event was particularly important because neutrinos emitted from an exploding star were detected on Earth for the first time. This discovery implies that the core of the progenitor star must have collapsed producing a shock wave — similar to the sonic boom from a supersonic plane — that ejected part of the stellar material into the surrounding environment. As a result, a compact object such as a neutron star, a relic of the stellar core, should have formed in the very heart of SN 1987A. However, despite the continuous monitoring performed at almost all wavelengths since the SN was detected, no clear indication for this compact object has been found so far. Various hypotheses have been proposed to explain this non-detection, such as the formation of a black hole instead of a neutron star. 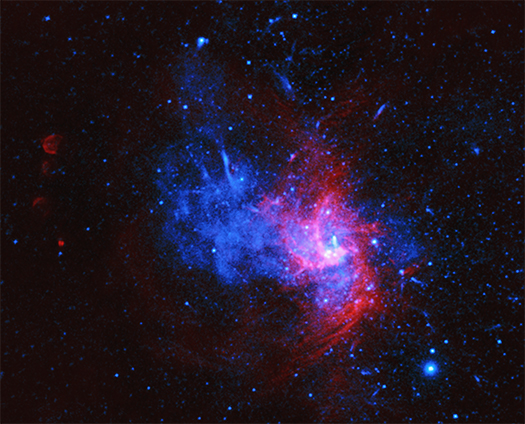 Astronomers have found evidence for an unusual type of supernova near the center of the Milky Way galaxy, as reported in our latest press release. This composite image contains data from NASA's Chandra X-ray Observatory (blue) and the NSF's Very Large Array (red) of the supernova remnant called Sagittarius A East, or Sgr A East for short. This object is located very close to the supermassive black hole in the Milky Way's center, and likely overruns the disk of material surrounding the black hole.

Researchers were able to use Chandra observations targeting the supermassive black hole and the region around it for a total of about 35 days to study Sgr A East and find the unusual pattern of elements in the X-ray signature, or spectrum. An ellipse on the annotated version of the images outlines the region of the remnant where the Chandra spectra were obtained.