The Science of Black Hole Kicks: An Interview with Avi Loeb

For more context on CID-42 and the science of black hole kicks, we interviewed Professor Abraham (Avi) Loeb, one of the co-authors of the new paper. Avi is the director of the Institute for Theory and Computation, within the Harvard-Smithsonian Center for Astrophysics, and he is currently serving as Chair of the Department of Astronomy at Harvard University. He was recently elected to become a member of the American Academy of Arts & Sciences. Avi has worked on a wide variety of topics in astrophysics, including cosmology, black holes, gravitational lensing by planets and gamma-ray bursts in the distant Universe. 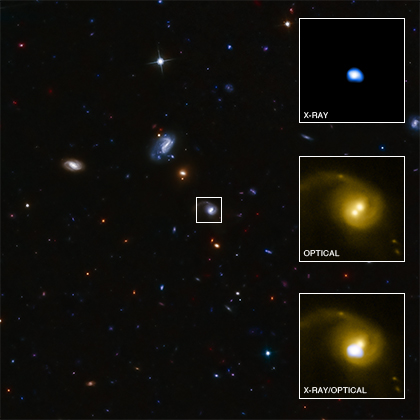 Q: How significant do you think this result is?

A: CID-42 is the best candidate for a massive black hole that might have been kicked out of the center of a galaxy with a high speed. An interesting mechanism for obtaining such a kick involves the merger of two black holes into the kicked black hole.

Almost a century ago, Albert Einstein formulated the modern set of equations that are used to describe gravity. Einstein's equations are so complicated that we were able to solve them accurately only a few years ago for a relatively simple system of two black holes in a bound orbit. Such a system forms naturally as a result of a merger between two galaxies, each hosting a single black hole at its center. The exact solution to Einstein's equations, obtained with sophisticated computer algorithms, shows that the two black holes merge into a single black hole which is kicked in a preferred direction like a rocket due to the directional emission of gravitational waves which serve as the substance coming out from the rocket exhaust.

If CID-42 was indeed produced by this mechanism, it provides the first observational validation of Einstein's equations in the unexplored regime of dynamical strong gravity, which is responsible for gravitational wave kicks.

Q: There have been a few other candidates for black holes ejected from galaxies by gravitational waves. How does this one stand out from the others?

A: CID-42 is the strongest candidate for such a recoiled black hole because the active black hole is offset from the center of the galaxy in both position and velocity. No other system shows these offsets so clearly.

Q: Please explain how gravitational radiation can impart a kick to a black hole after a merger. Why has it only been recently that very powerful kicks -- enough to throw the black hole out of the galaxy -- have been predicted?

A: Astrophysical black holes are characterized by two numbers: mass and spin. If the merging black holes have no spin, the recoil speed of the remnant black hole is modest, limited to 200 kilometers per second. Such an ejection speed would not allow the black hole at the center of the Milky Way galaxy to escape. However, if the merging black holes have spins, the kick velocity could reach thousands of kilometers per second for special spin orientations. Only recently were researchers able to solve Einstein's equations for binary black hole systems with all possible spin configurations.

Q: How common are black hole pairs and mergers likely to be in the local universe and in the early universe?

A: A galaxy like the Milky Way has a sizeable chance to merge with a comparable-mass galaxy, like its neighbor Andromeda galaxy, during the past ten billion years. In the early universe, mergers of galaxies were more common since the Universe was denser and they were closer to each other. In fact, a galaxy like the Milky Way was assembled out of many mergers of smaller building blacks at early cosmic time. The formation of black hole binaries and gravitational wave emission was a common phenomenon at these early times. Astronomers proposed a space-based observatory for these gravitational waves, called the Laser Interferometer Space Antenna (LISA), which is not funded yet. If funded, this observatory will open a new window into the early history of black hole formation in the Universe.

A: Until the LISA observatory is funded, we have to rely on detecting electromagnetic waves (using ordinary telescopes) from systems such as CID-42, as a test of Einstein's theory of gravity.

A: Indeed, the ejection of black holes from galaxy centers could affect the evolution of their host galaxies. However, large kicks of the magnitude associated with CID-42 must be rare, since we do not know of many such examples.