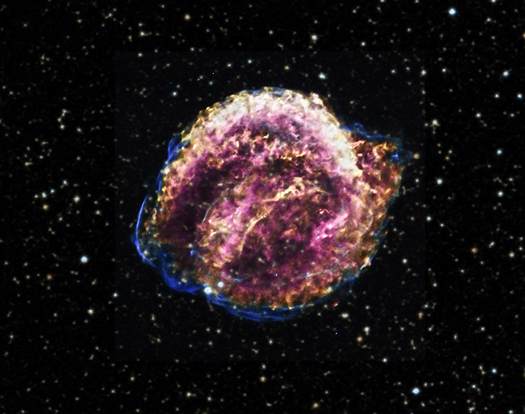 In 1604, a new star appeared in the night sky that was much brighter than Jupiter and dimmed over several weeks. This event was witnessed by sky watchers including the famous astronomer Johannes Kepler. Centuries later, the debris from this exploded star is known as the Kepler supernova remnant.

Astronomers have long studied the Kepler supernova remnant and tried to determine exactly what happened when the star exploded to create it. New analysis of a long observation from NASA's Chandra X-ray Observatory is providing more clues. This analysis suggests that the supernova explosion was not only more powerful, but might have also occurred at a greater distance, than previously thought.

This image shows the Chandra data derived from more than 8 days worth of observing time. The X-rays are shown in five colors from lower to higher energies: red, yellow, green, blue, and purple. These various X-ray slices were then combined with an optical image from the Digitized Sky Survey (light yellow and blue), showing stars in the field.

Previous analysis of this Chandra image has determined that the stellar explosion that created Kepler was what astronomers call a "Type Ia" supernova. This class of supernovas occurs when a white dwarf gains mass, either by pulling gas off a companion star or merging with another white dwarf, until it becomes unstable and is destroyed by a thermonuclear explosion.