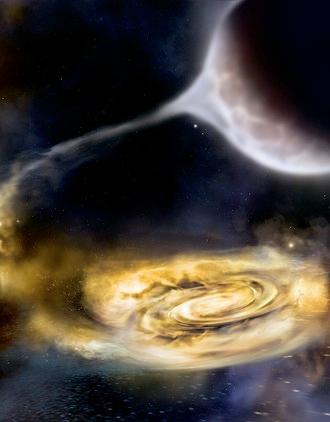 An international collaboration of scientists, using data from Chandra and other X-ray telescopes over two decades, has shown that the “weather” around some black holes is stormier than previously thought.

The research, which appears in the January 22th issue of the journal Nature and is available on the arXiv, looked at 21 outbursts in X-rays from 12 X-ray binaries, that is, systems where a stellar-mass black hole is in close orbit with a companion star.

This work provides the first evidence for the existence of strong winds surrounding black holes that are sustained throughout outburst events. This indicates that these winds are responsible for blowing some matter out of the black hole’s accretion flow. Until now, strong winds had only been seen in limited parts of these events. Astronomers are still trying to determine what causes these winds. More information on this result can be found in this write up from the Nicholas Copernicus Astronomical Center of the Polish Academy of Sciences.

This new result adds to the body of work that scientists have collected about winds around black holes. For example, in 2012, scientists clocked the fastest-ever winds from a stellar-mass black hole – some 20 million mph – in IGR J17091-3624. A few years later, other researchers discovered that when a passing star was shredded by a black hole, the winds from the black hole blew some of it back into space.

A wind can occur wherever there is a difference in pressure between two locations that is not balanced out by some other force such as gravity. On Earth, winds can blow briefly during a storm, or over long time scales, as in the jet streams. Winds have also been detected on other planets, in interplanetary space as the solar wind, around stars, in galaxies, and, of course, around black holes. For more about how winds can be found both near and far, explore our “Here, There, and Everywhere” project.