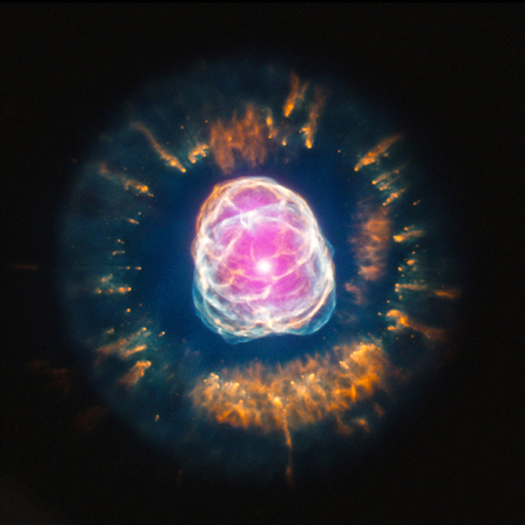 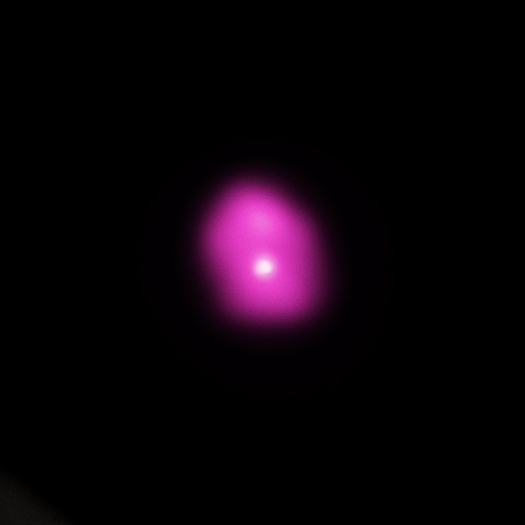 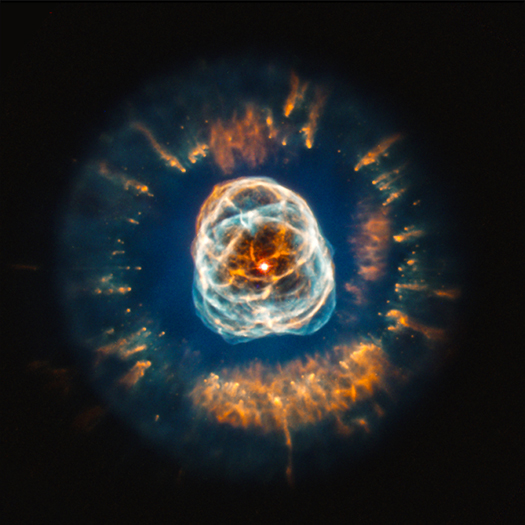 
Stars like the Sun can become remarkably photogenic at the end of their life. A good example is NGC 2392, which is located about 4,200 light years from Earth. NGC 2392, is what astronomers call a planetary nebula. This designation, however, is deceiving because planetary nebulas actually have nothing to do with planets. The term is simply a historic relic since these objects looked like planetary disks to astronomers in earlier times looking through small optical telescopes.

Instead, planetary nebulas form when a star uses up all of the hydrogen in its core -- an event our Sun will go through in about five billion years. When this happens, the star begins to cool and expand, increasing its radius by tens to hundreds of times its original size. Eventually, the outer layers of the star are carried away by a 50,000 kilometer per hour wind, leaving behind a hot core. This hot core has a surface temperature of about 50,000 degrees Celsius, and is ejecting its outer layers in a much faster wind traveling six million kilometers per hour. The radiation from the hot star and the interaction of its fast wind with the slower wind creates the complex and filamentary shell of a planetary nebula. Eventually the remnant star will collapse to form a white dwarf star.

Now days, astronomers using space-based telescopes are able to observe planetary nebulas such as NGC 2392 in ways their scientific ancestors probably could never imagine. This composite image of NGC 2392 contains X-ray data from NASA's Chandra X-ray Observatory in purple showing the location of million-degree gas near the center of the planetary nebula. Data from the Hubble Space Telescope show — colored red, green, and blue — the intricate pattern of the outer layers of the star that have been ejected. The comet-shaped filaments form when the faster wind and radiation from the central star interact with cooler shells of dust and gas that were already ejected by the star.

The observations of NGC 2392 were part of a study of three planetary nebulas with hot gas in their center. The Chandra data show that NGC 2392 has unusually high levels of X-ray emission compared to the other two. This leads researchers to deduce that there is an unseen companion to the hot central star in NGC 2392. The interaction between a pair of binary stars could explain the elevated X-ray emission found there. Meanwhile, the fainter X-ray emission observed in the two other planetary nebulas in the sample — IC 418 and NGC 6826 — is likely produced by shock fronts (like sonic booms) in the wind from the central star. A composite image of NGC 6826 was included in a gallery of planetary nebulas released in 2012.

It's actually a nice and helpful piece of information. I'm glad that you shared this useful information with us. Please keep us up to date like this. Thanks for sharing.

Excellent your instructions - thanks! Should be distributed to all schools global wide.

I was astounded, or at least extremely pleasantly surprised, to see your use of only International measurement units in the text accompanying this image. I sincerely hope this will continue into the future. I am sure it will go far in improving the readability of your texts for an international audience.
Regarding the text itself, I thought it was quite well-written and explained the effects in the image quite well. The image is also of high quality, and although this is not the first time an image of this object has been published, it remains almost a work of art.

Circus in the Sky