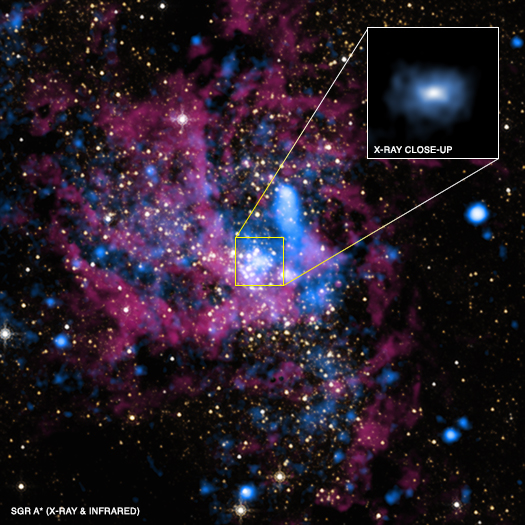 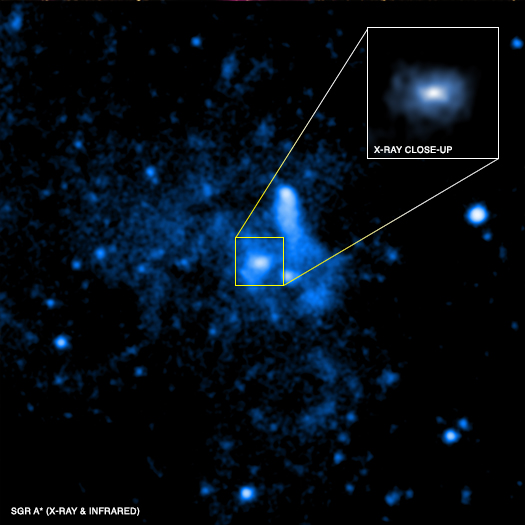 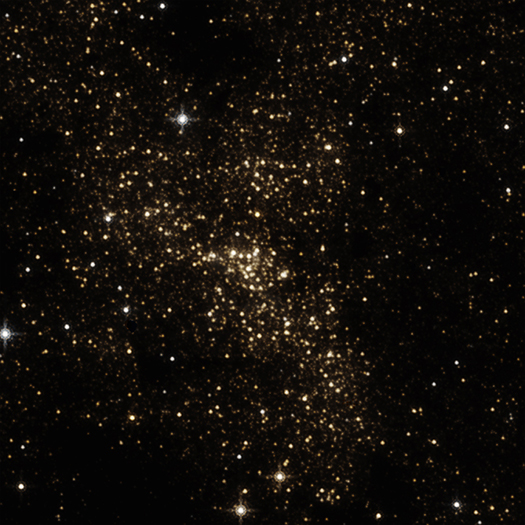 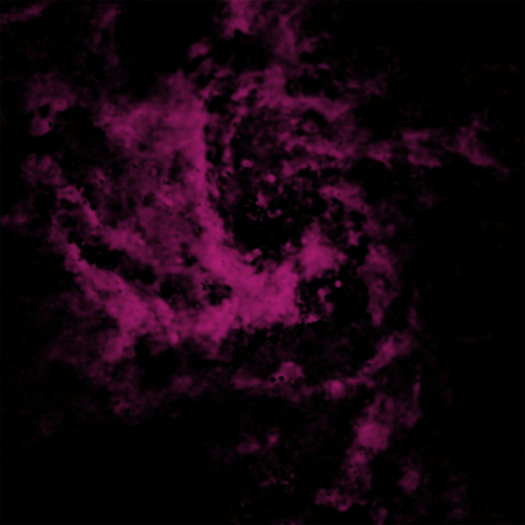 
The center of the Milky Way galaxy, with the supermassive black hole Sagittarius A* (Sgr A*) located in the middle, is revealed in these images. As described in our press release, astronomers have used NASA's Chandra X-ray Observatory to take a major step in understanding why gas around Sgr A* is extraordinarily faint in X-rays.

The large image contains X-rays from Chandra in blue and infrared emission from the Hubble Space Telescope in red and yellow. The inset shows a close-up view of Sgr A* only in X-rays, covering a region half a light year

These new findings are the result of one of the biggest observing campaigns ever performed by Chandra. During 2012, Chandra collected about five weeks worth of observations to capture unprecedented X-ray images and energy signatures of multi-million degree gas swirling around Sgr A*, a black hole with about 4 million times the mass of the Sun. At just 26,000 light years from Earth, Sgr A* is one of very few black holes in the Universe where we can actually witness the flow of matter nearby.

Illustration of Sagittarius A*

The authors infer that less than 1% of the material initially within the black hole's gravitational influence reaches the event horizon, or point of no return, because much of it is ejected. Consequently, the X-ray emission from material near Sgr A* is remarkably faint, like that of most of the giant black holes in galaxies in the nearby Universe.

The captured material needs to lose heat and angular momentum before being able to plunge into the black hole. The ejection of matter allows this loss to occur.

This work should impact efforts using radio telescopes to observe and understand the "shadow" cast by the event horizon of Sgr A* against the background of surrounding, glowing matter. It will also be useful for understanding the impact that orbiting stars and gas clouds might make with the matter flowing towards and away from the black hole.

The way how stars and galaxies work, It s good to stretch our minds and study outer space where trillions of the stars a smallness does erase. With light-years in the billions we cannot realize the vastness of our space that all around us lies. It is the star dust that makes me wonder how the endless time itself was created. But I still have a question to ask, from planets to stars to black holes, is it true that the Andromeda Galaxy is moving toward us?

I do not understand much of this but I liked the blue and magenta blobs all spotted with intense white, thanks.

Thanks for making such wonderful stuff as this available to those of us who are fascinated by the existence of all the known and unknown "celestial bodies"? and of the myriad implications to questions relating to the origin of man, among many others. I love sharing these things with my grandchildren!

Considering our system isn't active or peculiar, we do live in an awesome place! Also new research suggests that the Magellanic Clouds are not true companions of the Milky Way but might simply be passing through.

A supermassive black hole located 26,000 light years from Earth in the center of the Milky Way.
About 26,000 light years from Earth.
Combining X-rays from Chandra with infrared emission from the Hubble Space Telescope
About 7.5 light years across.
X-rays are blue, infrared red and yellow.
In the constellation Sagittarius, visible in the Northern and Southern Hemispheres.
Rate This Image
Rating: 3.8/5
(991 votes cast)
Download & Share
JPEG (551.5 kb)
Large JPEG (3.4 MB)
Tiff (37.1 MB)
View on the Sky (WWT)
Handout (pdf)
Image Feed
More Information
Press Room: Sagittarius A*
For Kids: Sagittarius A*
Blog: Too Hot to Swallow