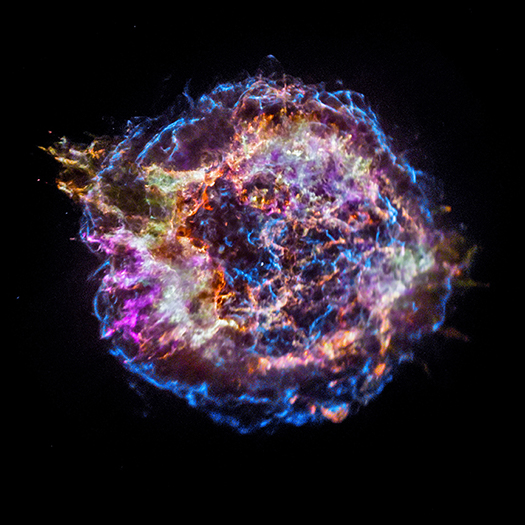 Location of elements in Cassiopeia A. Credit: NASA/CXC/SAO

The Chandra data indicate that the supernova that produced Cas A has churned out prodigious amounts of key cosmic ingredients. Cas A has dispersed about 10,000 Earth masses worth of sulfur alone, and about 20,000 Earth masses of silicon. The iron in Cas A has the mass of about 70,000 times that of the Earth, and astronomers detect a whopping one million Earth masses worth of oxygen being ejected into space from Cas A, equivalent to about three times the mass of the Sun. (Even though oxygen is the most abundant element in Cas A, its X-ray emission is spread across a wide range of energies and cannot be isolated in this image, unlike the other elements that are shown.)

Astronomers have found other elements in Cas A in addition to the ones shown in this new Chandra image. Carbon, nitrogen, phosphorus and hydrogen have also been detected using various telescopes that observe different parts of the electromagnetic spectrum. Combined with the detection of oxygen, this means all of the elements needed to make DNA, the molecule that carries genetic information, are found in Cas A.

Oxygen is the most abundant element in the human body (about 65% by mass), calcium helps form and maintain healthy bones and teeth, and iron is a vital part of red blood cells that carry oxygen through the body. All of the oxygen in the Solar System comes from exploding massive stars. About half of the calcium and about 40% of the iron also come from these explosions, with the balance of these elements being supplied by explosions of smaller mass, white dwarf stars.

While the exact date is not confirmed (PDF), many experts think that the stellar explosion that created Cas A occurred around the year 1680 in Earth's timeframe. Astronomers estimate that the doomed star was about five times the mass of the Sun just before it exploded. The star is estimated to have started its life with a mass about 16 times that of the Sun, and lost roughly two-thirds of this mass in a vigorous wind blowing off the star several hundred thousand years before the explosion.

Earlier in its lifetime, the star began fusing hydrogen and helium in its core into heavier elements through the process known as "nucleosynthesis." The energy made by the fusion of heavier and heavier elements balanced the star against the force of gravity. These reactions continued until they formed iron in the core of the star. At this point, further nucleosynthesis would consume rather than produce energy, so gravity then caused the star to implode and form a dense stellar core known as a neutron star.

Pre-Supernova Star: As it nears the end of its evolution, heavy elements produced by nuclear fusion inside the star are concentrated toward the center of the star. Illustration Credit: NASA/CXC/S. Lee

The exact means by which a massive explosion is produced after the implosion is complicated, and a subject of intense study, but eventually the infalling material outside the neutron star was transformed by further nuclear reactions as it was expelled outward by the supernova explosion.

Chandra has repeatedly observed Cas A since the telescope was launched into space in 1999. The different datasets have revealed new information about the neutron star in Cas A, the details of the explosion, and specifics of how the debris is ejected into space.

Would it be possible for me to reuse the Origins Solar System Elements figure in a curriculum unit? I am writing for 11th grade Chemistry.

I wish I had access to these wonderful pictures and diagrams when I was teaching Astronomy in the High School. It would have made it so much easier for my students to visualize magic instide of the Hertsprung-Russell diagram.

In the year 1572, the world famous danish astronomer Tycho Brahe, discovered and descibed a new star called it stella nova in Cassiopeia. It has later been belived to be a super nova and named SN1572.
Is this SN1572 the same object as Cas A?

Thank you for this excellent article. I study Astrochemistry and usually start my presentations with the origin of the elements and quickly proceed to the molecules forming in the clouds etc.
Great Christmas present for me. The graphics are nicely explained.
Happy New Year and please keep up the good work

Thanks you for this page. I use this one, and others, to satisfy my hunger of cosmos knowledge and give me hours of pleasure reading you.

Hi, beautiful images and great article. If one looks at planetary nebs such as M57 and M27 you can clearly see the green emission from doubly ionized oxygen. In fact the green color dominates most of the light. Doesn't this suggest that at least some of the oxygen in the universe gets there from normal fusion is average sized stars and is then ejected in the death of these stars? Your graphic has 100% of the oxygen being created in exploding massive stars.

Wonderful photos and great detail. I enjoy reading about space and the universe but I must say your articles are very insightful.
Thanks for the good work.

Animation & Video
Tour of Cassiopeia A