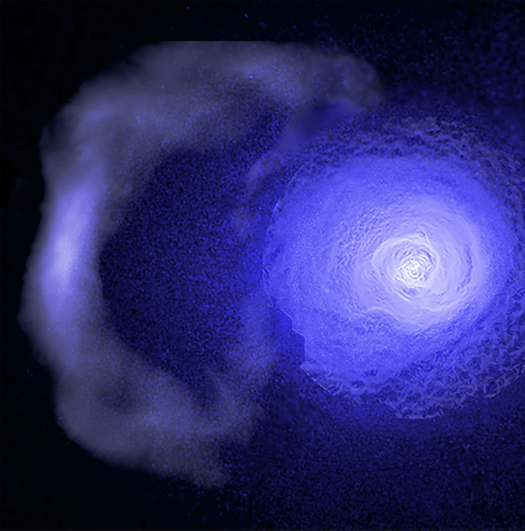 This graphic shows the cold front in the Perseus cluster. The image above contains X-ray data from Chandra — for regions close to the center of the cluster —along with data from ESA's XMM-Newton and the now-defunct German Roentgen (ROSAT) satellite for regions farther out. The Chandra data have been specially processed to brighten the contrast of edges to make subtle details more obvious.

The cold front is the long vertical structure on the left side of the image (rollover the image above to view labels). It is about two million light years long and has traveled away from the center of the cluster at about 300,000 miles per hour.

The cold front has not only survived for over a third of the age of the Universe, but it has also remained surprisingly sharp and split into two different pieces. Astronomers expected that such an old cold front would have been blurred out or eroded over time because it has traveled for billions of years through a harsh environment of sound waves and turbulence caused by outbursts from the huge black hole at the center of Perseus.

Instead, the sharpness of the Perseus cold front suggests that the structure has been preserved by strong magnetic fields that are wrapped around it. The comparison of the Chandra X-ray data to theoretical models also gives scientists an indication of the strength of the cold front's magnetic field for the first time.

While cold fronts in the Earth's atmospheres are driven by rotation of the planet, those in the atmospheres of galaxy clusters like Perseus are caused by collisions between the cluster and other clusters of galaxies. These collisions typically occur as the gravity of the main cluster pulls the smaller cluster inward towards its central core. As the smaller cluster makes a close pass by the central core, the gravitational attraction between both structures causes the gas in the core to slosh around like wine swirled in a glass. The sloshing produces a spiral pattern of cold fronts moving outward through the cluster gas.

The results of this work appear in a paper that will be published in the April issue of Nature Astronomy and is available online. The authors of the paper are Stephen Walker (Goddard Space Flight Center), John ZuHone (Harvard-Smithsonian Center for Astrophysics), Jeremy Sanders (Max Planck Institute for Extraterrestrial Physics), and Andrew Fabian (Institute of Astronomy, Cambridge, England.)

Animation & Video
A Tour of the cold front
in Perseus