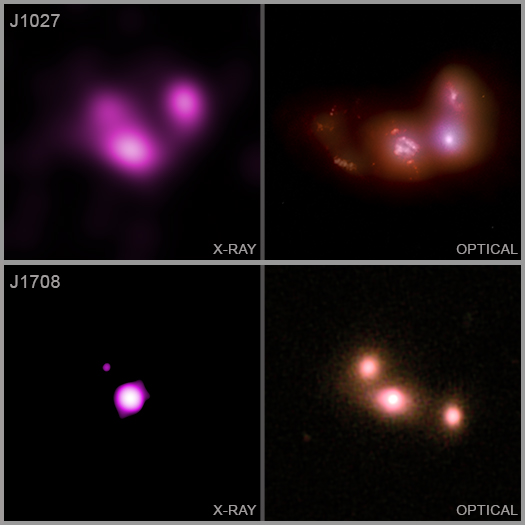 A new study helps reveal what happens to supermassive black holes when three galaxies merge, as reported in our latest press release. This result, which used data from NASA's Chandra X-ray Observatory and several other telescopes, tells astronomers more about how galaxies and the giant black holes in their centers grow over cosmic time.

While there have been previous studies of mergers between two galaxies, this is one of the first to systematically look at the consequences for supermassive black holes when three galaxies come together. This panel of images contains data from two of seven galactic collisions in the new study containing two supermassive black holes left growing after the collision. The pair of mergers are seen in X-rays from Chandra (left in purple) and optical data (right) from NASA's Hubble Space Telescope and the Sloan Digital Sky Survey (SDSS). Circles in a labeled version of the Chandra image show X-rays from hot gas falling towards each black hole.

Using specialized software, the team went through Chandra data targeting these systems to detect X-ray sources marking the location of growing supermassive black holes. As material falls toward a black hole, it gets heated to millions of degrees and produces X-rays. The combination of the new software and Chandra's sharp X-ray vision enabled the researchers to identify the black holes despite their close proximity in the images.

Once they found evidence for bright X-ray sources as candidates for growing supermassive black holes in the Chandra data, the researchers incorporated archival data from other telescopes such as WISE mission, the Infrared Astronomical Satellite, and the Two Micron All Sky Telescope as another check in the process.

Studies of triple mergers can help scientists understand whether pairs of supermassive black holes can approach so close to each other that they make ripples in spacetime called gravitational waves. The energy lost by these waves will inevitably cause the black holes to merge.

Adi Foord presented the new study, which she worked on as part of her Ph.D. at the University of Michigan, at the 237th meeting of the American Astronomical Society, which is being held virtually from January 11-15, 2021. Two papers describing this work have recently been accepted for publication in The Astrophysical Journal and preprints are available here and here.