How a Planet Can Mess Up a Star's Looks

Note: An earlier version of this article appeared on Peter Edmonds' blog.

Recently, beautiful photos of auroras have been in the news. These colorful light shows were generated by solar storms, and provide a vivid demonstration of activity on the Sun affecting the Earth. The pummeling experienced by our home planet is an example of our one-way relationship with the Sun: it can have a noticeable effect on the Earth, but the Earth has a negligible effect on the Sun. Further afield in the galaxy, this isn't always the case. In a few other systems planets can have a big effect on their star, changing their looks in surprising ways. 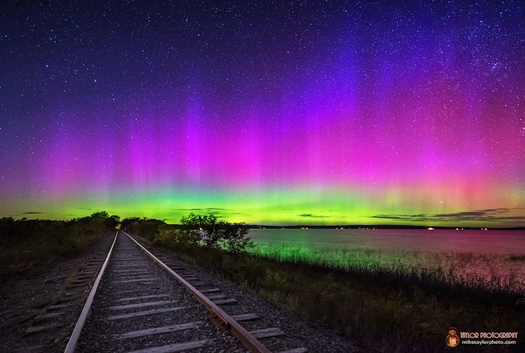 As explained in the latest press release from NASA's Chandra X-ray Observatory, an exoplanet called WASP-18b appears to be causing the star it orbits to act much older than it actually is. WASP-18b is an example of a hot Jupiter, with a mass about ten times that of Jupiter and an orbit that is less than 24 hours long. The host star, WASP-18, is estimated to have an age that lies between about 500 million and 2 billion years, relatively young by astronomical standards.

Younger stars tend to be more active stars, with stronger magnetic fields, larger flares, and more intense X-ray emission than their older counterparts. Magnetic activity, flaring, and X-ray emission are linked to the stellar rotation, which generally declines with age. However, when astronomers took a long look with Chandra at WASP-18, they didn’t detect any X-rays. Using established relations between the magnetic activity and X-ray emission of stars and their age indicates that WASP-18 is about 100 times less active than it should be at its age.

The planet’s gravity may cause motions of gas in the interior of the star that weaken the convection, causing the magnetic field to weaken and activity to decline. This causes the appearance of premature aging in the star. WASP-18 is thought to have a shallow convection zone, making it unusually susceptible to tidal effects. 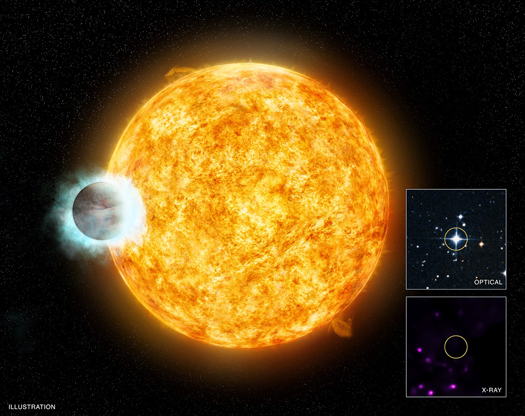 Shown in the main part of this graphic is an artist's impression of the star WASP-18 and, in the foreground, its hot Jupiter WASP-18b. The insets show the star in the optical image and its non-detection in X-rays with Chandra. Credit: X-ray: NASA/CXC/SAO/I.Pillitteri et al; Optical: DSS; Illustration: NASA/CXC/M.Weiss

What about other hot Jupiters that are relatively massive and close to their star? In some cases - where they orbit a different type of star to WASP-18 - the effect of hot Jupiters can be flipped and they can make a star appear younger than it really is. In the cases of HD 189733 and CoRoT-2a the presence of the planet appears to have increased the amount of activity in the star. In these cases the stars have much deeper convection zones than WASP-18 and tidal effects have little influence on convection and hence on the star's dynamo. Instead, the planets may be speeding up their star's rotation, leading to a more powerful dynamo and more activity than expected for the star's age. In these cases having a companion makes the star act younger than it really is. That makes sense for people and, in a few cases, for stars. 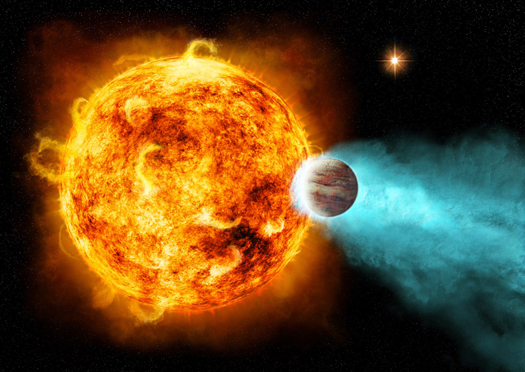 An artist's impression of the star CoRoT-2a and its hot Jupiter exoplanet, CoRoT-2b. Credit: NASA/CXC/M.Weiss

I've discussed the effects that extreme hot Jupiters can have on their host star. In such systems, what effect does the star have on its planet? In the cases of HD 189733 and CoRoT-2a, strong X-rays and ultraviolet radiation from the active star are evaporating the atmospheres of the planet. For HD 189733, astronomers estimate the planet is losing 100 to 600 million kilograms per second, and for CoRoT-2a astronomers estimate the planet is losing about 5 billion kilograms per second. For WASP-18, with much weaker X-ray emission and ultraviolet radiation, there is much less evaporation of the nearby planet's upper atmosphere than there would be if the star was more active. In effect, the planet is protecting itself. Its gravity causes the nearby star to be less active, and that causes the planet to be struck with less damaging radiation. HD 189733b and CoRoT-2b, on the other hand, are behaving in a self-destructive manner.

Talk of planet destruction isn’t necessary for our present-day solar system, where the planets are much further away from the Sun than hot Jupiters are. However, that won’t always be the case. A few billion years in the future, the Sun will dramatically expand in size when it becomes a red giant. Our oceans will boil away, never to return and what’s left of the Earth may end up spiraling in towards the Sun. We don't know the exact fate of our home planet, but it is clear that our aurora-viewing days are numbered.