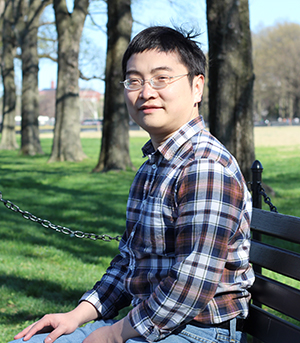 We are very pleased to welcome Bin Luo as a guest blogger today. He led the study on supermassive black holes that is the subject of our latest press release. Bin obtained a PhD degree in Astronomy and Astrophysics from the Pennsylvania State University in 2010, working on the Chandra Deep Field surveys. He then worked as a postdoctoral fellow at the Harvard-Smithsonian Center for Astrophysics, and later back at the Pennsylvania State University. He will start a faculty position in September 2015 at the Nanjing University in China. Bin has mainly been working on X-ray studies of supermassive black holes in the centers of galaxies. He is now leading the data analysis of the 7-million-second (81 days) Chandra Deep Field-South survey, the deepest Chandra observation ever performed.

I have been studying the X-ray emission from accreting supermassive black holes since I was a graduate student. These monstrous black holes – quasars fueled by large amounts of gas and dust, consuming of the order of a couple solar masses per year – are known nearly universally to be strong X-ray emitters. Meanwhile, strong line emission – that is, light coming from a narrow range of wavelengths – is also a hallmark of quasar spectra in optical and ultraviolet bands. Therefore, I was quite puzzled when we discovered that a small group of quasars with remarkably weak ultraviolet line emission are often extremely X-ray weak. The pioneering work was led by Jianfeng Wu, Niel Brandt, and Pat Hall in 2011 and 2012, where the X-ray emission from 19 such quasars was examined. What makes things even more interesting is that for a subgroup of these quasars selected with refined ultraviolet properties, almost 100% are weak in X-ray light.

"Something important is going on with them that might explain the extreme emission-line and X-ray properties in a unified manner." This was our thinking. While these extreme quasars are rare, their exceptional characteristics constitute a challenge to our overall understanding of quasar physics. Such exceptional objects might reveal phenomena that are generally applicable, but are difficult to identify when more subtly expressed in the overall population.

However, at that moment, the small sample size prevented us from drawing solid physical conclusions. Fortunately, we were awarded Chandra time to observe 32 additional objects, making a combined sample of 51 weak-lined quasars. The new observations started in late 2012 and spanned over a year. We were so eager to see the results that analyses were performed within hours of when each new data set was available.

Things did become clearer as the new data continued to come in. We learned that these quasars do make strong X-rays in their central engines. However, for certain viewing directions, most of the emitted X-ray photons are absorbed by some intervening material located very close to the black hole. This same "shielding" material also blocks much of the radiation from striking the gas that would normally produce strong ultraviolet emission lines. By the time of the last few Chandra observations, we were actually able to predict successfully whether our line of sight intersects the shielding material based on the optical and ultraviolet properties, and thus predict whether we would see an X-ray weak or X-ray normal quasar.

Considering all the constraints we found from the X-ray, optical, and ultraviolet data, the shielding material is likely the inner disk of matter being pulled into the black hole. We suggest that these supermassive black holes are growing at about or even exceeding the Eddington limit (an idealized limit on black hole growth considering the balance between the inward gravitational pull and the outward radiation pressure). As per earlier studies of super-Eddington black hole accretion, the disk of material will puff up substantially under such circumstances to provide the required shielding effect and explain – in a simple and unified manner – the weak emission lines, the remarkable X-ray luminosity and spectral properties, and the other multiwavelength properties.

Such wild growth of supermassive black holes is actually not surprising, as we expect quasars to go through such growth spurts given the huge black holes (up to about ten billion solar masses) found only about a billion years after the Big Bang. Quasars like those in our sample should be more common in the early Universe. In fact, while we were writing up our results, all over the news was the discovery of one of the most-distant and luminous quasars (an ultraluminous quasar at redshift 6.3, meaning that it is observed at a time only 880 million years after the Big Bang, found by Wu et al.) from the Sloan Digital Sky Survey. It appears to have weak emission lines, and super-Eddington growth helps to explain its apparent twelve-billion-solar-mass black hole.

We expect that shielding by the thick disks of matter falling toward supermassive black holes may play a broader role, beyond these extreme quasars, in helping to set the ultraviolet emission-line strengths of quasars more generally. We have proposed for Chandra observations of quasars with mildly weak emission lines and via these we hope to build a "bridge" between weak-lined quasars and typical quasars. Stay tuned.