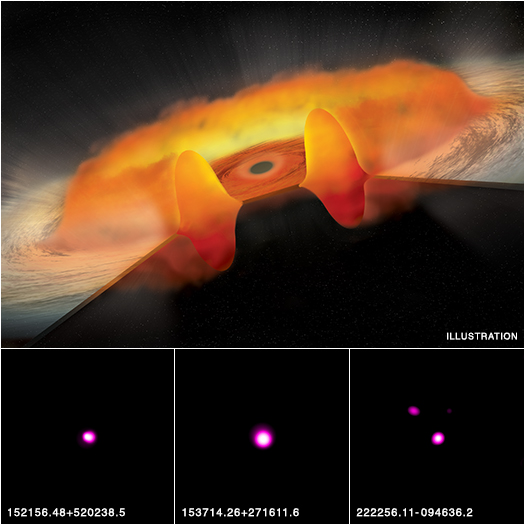 The quasars in this study - including the three shown as Chandra images in the bottom of the graphic - are located between about 5 billion and 11.5 billion light years from Earth. These quasars were selected because they had unusually weak emission from certain atoms, especially carbon, at ultraviolet wavelengths. Also, about 65% of the quasars in this new study were found to be much fainter in X-rays, by about 40 times on average, than typical quasars.

The weak ultraviolet atomic emission and X-ray fluxes from these objects could be an important clue to the question of how a supermassive black hole pulls in matter. Computer simulations show that, at low inflow rates, matter swirls toward the black hole in a thin disk. However, if the rate of inflow is high, the disk can puff up dramatically into a torus or donut that surrounds the inner part of the disk.

This is shown in the artist's illustration in the top part of the main graphic. X-rays, produced in the white region very near to the black hole, are substantially blocked by the thick, donut-shaped part of the disk, making the quasar unusually faint in X-rays. The X-rays are also prevented from striking the particles that are being blown away from the outer parts of the disk in a wind. This results in fainter ultraviolet emission from elements like carbon.

The important implication is that these "thick-disk" quasars may harbor black holes growing at an extraordinarily rapid rate. The current study and previous ones by different teams suggest that such quasars might have been more common in the early Universe, only about a billion years after the Big Bang. Such rapid growth might also explain the existence of huge black holes at even earlier times.

Nothing in the universe is stable. If so, a super massive black holes trillion times the mass of Sun, when explode, will it be similar to big bang explosion? or could it form a parallel universe.

Hi, Many thanks for this posting.

Why no associated jets visible if black holes consuming so much matter? Perhaps objects are too far away to see jets?