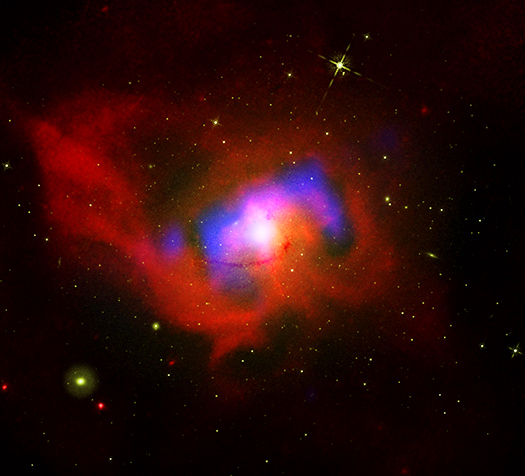 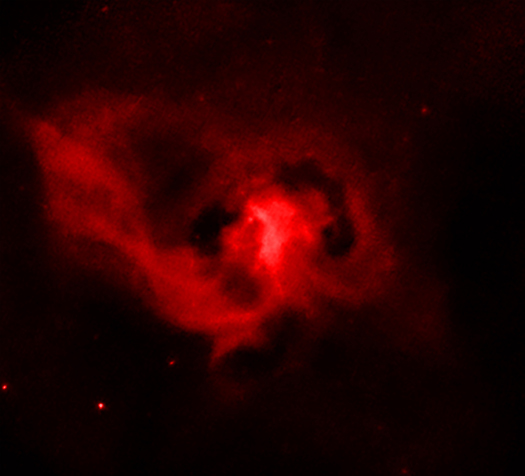 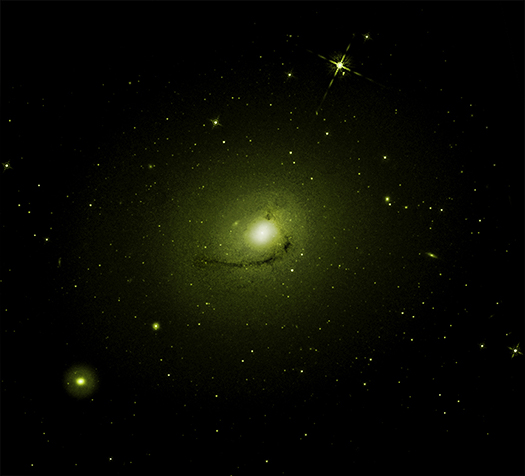 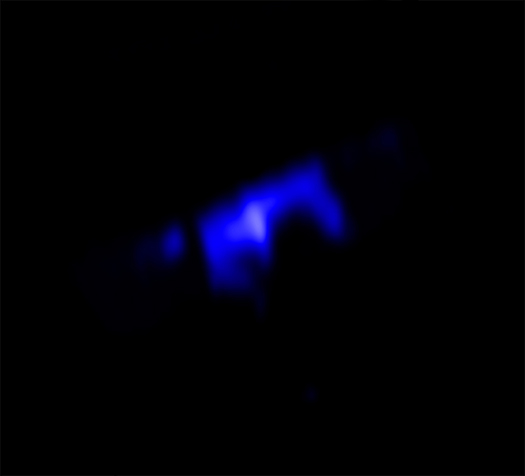 At the center of the Centaurus galaxy cluster, there is a large elliptical galaxy called NGC 4696. Deeper still, there is a supermassive black hole buried within the core of this galaxy.

New data from NASA's Chandra X-ray Observatory and other telescopes has revealed details about this giant black hole, located some 145 million light years from Earth. Although the black hole itself is undetected, astronomers are learning about the impact it has on the galaxy it inhabits and the larger cluster around it.

In some ways, this black hole resembles a beating heart that pumps blood outward into the body via the arteries. Likewise, a black hole can inject material and energy into its host galaxy and beyond.

By examining the details of the X-ray data from Chandra, scientists have found evidence for repeated bursts of energetic particles in jets generated by the supermassive black hole at the center of NGC 4696. These bursts create vast cavities in the hot gas that fills the space between the galaxies in the cluster. The bursts also create shock waves, akin to sonic booms produced by high-speed airplanes, which travel tens of thousands of light years across the cluster.

This composite image contains X-ray data from Chandra (red) that reveals the hot gas in the cluster, and radio data from the NSF's Karl G. Jansky Very Large Array (blue) that shows high-energy particles produced by the black hole-powered jets. Visible light data from the Hubble Space Telescope (green) show galaxies in the cluster as well as galaxies and stars outside the cluster.

Astronomers employed special processing to the X-ray data (shown above) to emphasize nine cavities visible in the hot gas. These cavities are labeled A through I in an additional image, and the location of the black hole is labeled with a cross. The cavities that formed most recently are located nearest to the black hole, in particular the ones labeled A and B.

The researchers estimate that these black hole bursts, or "beats", have occurred every five to ten million years. Besides the vastly differing time scales, these beats also differ from typical human heartbeats in not occurring at particularly regular intervals.

A different type of processing of the X-ray data reveals a sequence of curved and approximately equally spaced features in the hot gas. These may be caused by sound waves generated by the black hole's repeated bursts. In a galaxy cluster, the hot gas that fills the cluster enables sound waves — albeit at frequencies far too low for the human hear to detect — to propagate. (Note that both images showing the labeled cavities and this image are rotated slightly clockwise to the main composite.)

The features in the Centaurus Cluster are similar to the ripples seen in the Perseus cluster of galaxies. The pitch of the sound in Centaurus is extremely deep, corresponding to a discordant sound about 56 octaves below the notes near middle C. This corresponds to a slightly higher (by about one octave) pitch than the sound in Perseus. Alternative explanations for these curved features include the effects of turbulence or magnetic fields.

A paper describing these results was published in the March 21st 2016 issue of the Monthly Notices of the Royal Astronomical Society and is available online. The first author is Jeremy Sanders from the Max Planck Institute for Extraterrestrial Physics in Garching, Germany.

Cheryl, its not the absence of a heartbeat. It only means it's not rhythmic.

Arrhythmia is actually the absence of a heartbeat. Your article is contradicted by it's title. But, fascinating, really great information here... Beautiful imagery.

How can things "erupt" from a black hole? I thought it drew everything in towards it and that even light can't escape so how is this possible? I assume that the escaping particles can't travel faster than the speed of light of course.