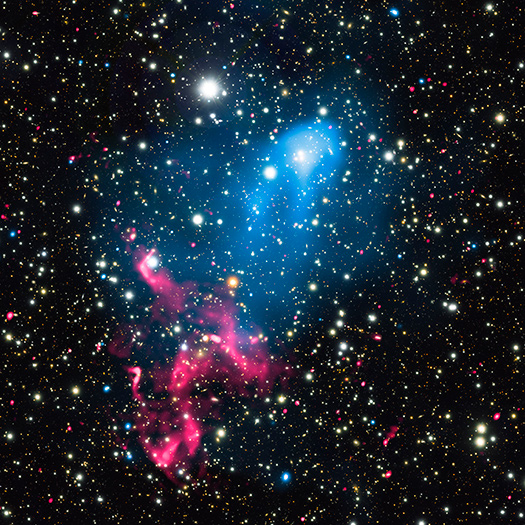 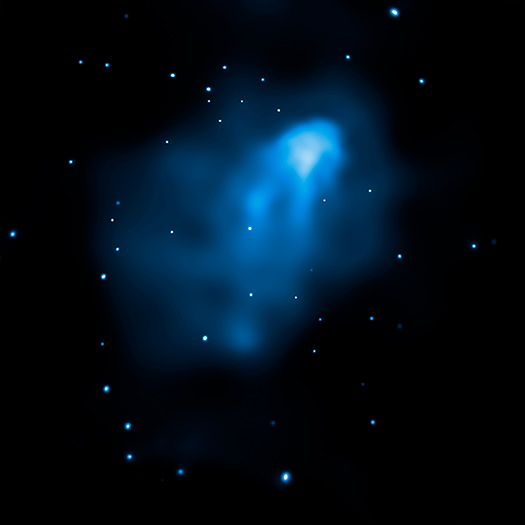 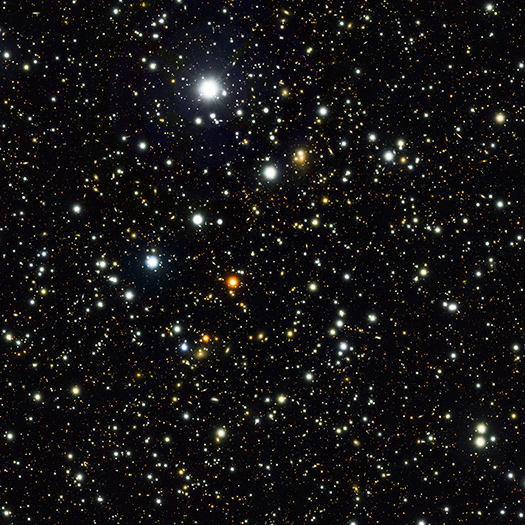 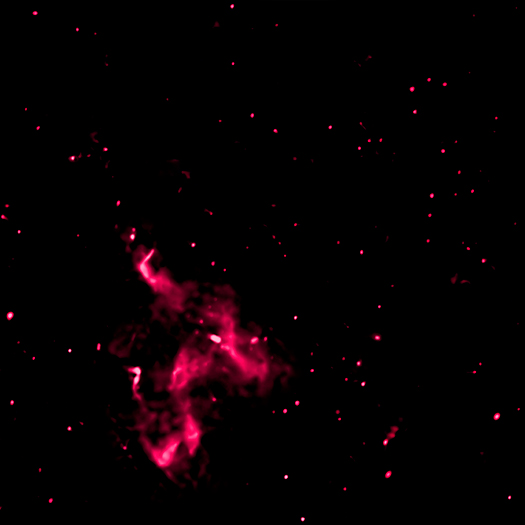 Using data from NASA's Chandra X-ray Observatory and several other telescopes, astronomers have discovered a cosmic one-two punch unlike any ever seen in a pair of colliding galaxy clusters called Abell 3411 and Abell 3412. This result, described in our latest press release, shows that an eruption from a supermassive black hole combined with a galaxy cluster merger can create a stupendous cosmic particle accelerator.

This composite image contains X-rays from Chandra (blue) that reveals diffuse emission from multi-million-degree gas in the two clusters. The comet-shaped appearance of the hot gas provides clear evidence that the two clusters are colliding and merging. The "head" of the comet is hot gas from one cluster plowing through the hot gas of the other cluster, in the direction shown by the arrow in the labeled image.

Radio emission detected by the Giant Metrewave Radio Telescope in India (red) represents colossal shock waves — cosmic versions of sonic booms generated by supersonic aircraft — produced by the collision of the hot gas associated with the galaxy clusters. Optical data from the Subaru telescope atop Mauna Kea, Hawaii, shows galaxies and stars with a range of different colors.

This spinning, supermassive black hole is producing a rotating, tightly-wound magnetic funnel. The powerful electromagnetic fields associated with this structure have accelerated some of the inflowing gas away from the vicinity of the black hole in the form of an energetic, high-speed jet. Then, these accelerated particles in the jet were accelerated again when they encountered the shock waves from the galaxy cluster collision.

Jets from the two other supermassive black holes (see labeled version of image) are likely having the same effect of accelerating particles before they get a second boost from the shock waves. The jets from one of the black holes are too short to be seen in the labeled image.

These results were presented at the 229th meeting of the American Astronomical Society meeting in Grapevine, TX. They were also described in a paper, led by Reinout van Weeren of the Harvard-Smithsonian Center for Astrophysics, which appeared in the inaugural issue of the journal Nature Astronomy on January 4, 2017.

Hey everyone.
Absolutely fabulous photographs. Because of your excellent work getting the photographs and explaining the phenomenon in terms easy enough that my 10yr old godson was able to read and comprehend almost everything... Now he wants to be an astronaut.
The only thing I wish you could have included a photo of just the 2 Galaxies.

I was wondering who's the author of this article, not the published article on the Journal of Nature, but the author who wrote this summary?

Is that the real colors or just to show contrast?