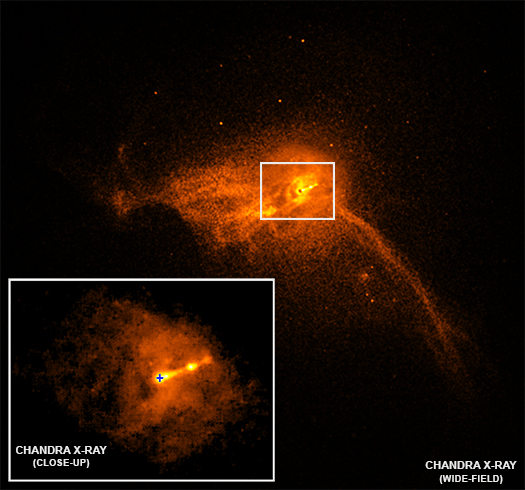 Astronomers have used NASA's Chandra X-ray Observatory to obtain data of Messier 87, or M87, during the April 2017 observing run by the Event Horizon Telescope (EHT). These X-ray data, in combination with the new radio image from the EHT and other observations, will help scientists learn more about high-energy emission and the physics of accretion and ejection at the event horizon, the boundary between what can and cannot escape the gravitational boundary of a black hole.

Chandra has a much larger field of view than the EHT, so it can view the full length of the jet of high-energy particles launched by the intense gravitational and magnetic fields around the black hole at M87. This jet, seen in detail from Chandra in the inset, extends more than 1,000 light years from the center of the galaxy.

On behalf of the EHT's Multiwavelength Working Group, Dr. Joey Neilsen of Villanova University and his collaborators put in a request for Director's Discretionary Time to observe M87 simultaneously with the EHT, and received nearly 30,000 seconds of observing time during April 2017.

Neilsen, Villanova undergraduate student Jadyn Anczarski, and their collaborators used Chandra and NuSTAR to measure the X-ray brightness of the jet, a data point that EHT scientists used to evaluate their models of the jet. Future questions the Chandra data may help explore include: How do black holes accelerate some particles to the very high energies that scientists have seen? How does the black hole produce the spectacular jets that Chandra and Hubble have studied for many years? Can data from Chandra and NASA's NuSTAR observatory help play a role in determining more about the physics in this environment?

M87 is an elliptical galaxy in the Virgo galaxy cluster, about 60 million light years away from Earth. For years, scientists have known that a supermassive black hole weighing several billion times the mass of the Sun sits at the center of M87. Surrounding the elliptical galaxy is a reservoir of multimillion-degree gas, which glows brightly in X-ray light. Chandra's studies of this hot gas have given astronomers insight into the behavior and properties of the giant black hole.

Read the full story on the M87 observations and the EHT results in our Chandra blog: http://chandra.si.edu/blog/node/719

A Black Hole Primer
with Chandra