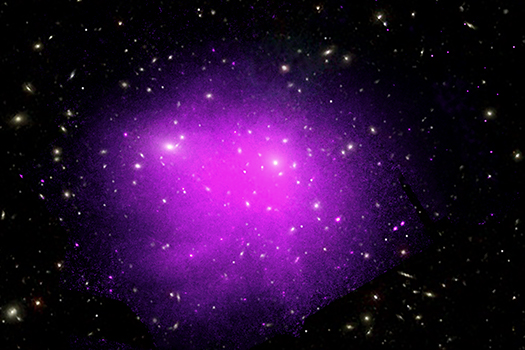 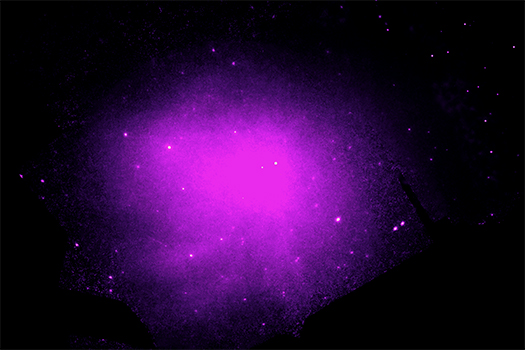 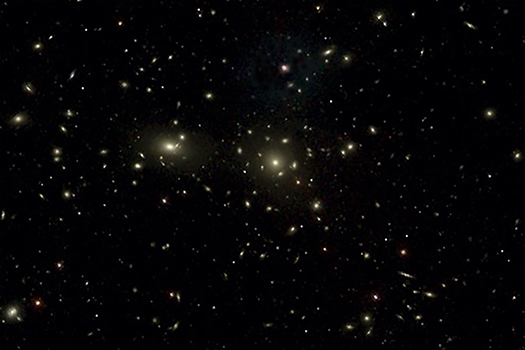 This image represents a deep dataset of the Coma galaxy cluster obtained by NASA's Chandra X-ray Observatory. Researchers have used these data to study how the hot gas in the cluster behaves, as reported in our press release. One intriguing and important aspect to study is how much viscosity, or "stickiness," the hot gas demonstrates in these cosmic giants.

Galaxy clusters are comprised of individual galaxies, hot gas, and dark matter. The hot gas in Coma glows in X-ray light observed by Chandra. Seen as the purple and pink colors in this new composite image, the hot gas contains about six times more mass than all of the combined galaxies in the cluster. The galaxies appear as white in the optical part of the composite image from the Sloan Digital Sky Survey. (The unusual shape of the X-ray emission in the lower right is caused by the edges of the Chandra detectors being visible.)

Despite its abundance, the density of the multimillion-degree gas in Coma, which is permeated by a weak magnetic field, is so low that the particles do not interact with each other very often. Such a low-density, hot gas cannot be studied in a laboratory on Earth, and so scientists must rely on cosmic laboratories such as the one provided by the intergalactic gas in Coma.

The researchers used the Chandra data to probe whether the hot gas was smooth on the smallest scales they could detect. They found that it is not, suggesting that turbulence is present even on these relatively small scales and the viscosity is low.

Why is the viscosity of Coma's hot gas so low? One explanation is the presence of small-scale irregularities in the cluster's magnetic field. These irregularities can deflect particles in the hot gas, which is composed of electrically charged particles, mostly electrons, and protons. These deflections reduce the distance a particle can move freely and, by extension, the gas viscosity.

Knowledge of the viscosity of gas in a galaxy cluster and how easily turbulence develops helps scientists understand the effects of important phenomena such as collisions and mergers with other galaxy clusters, and galaxy groups. Turbulence generated by these powerful events can act as a source of heat, preventing the hot gas in clusters from cooling to form billions of new stars.

Animation & Video
A Tour of the Coma Cluster