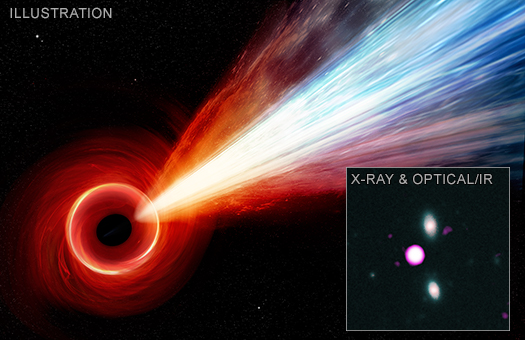 Astronomers may have found the most distant supermassive black hole with a jet detected in X-rays using NASA's Chandra X-ray Observatory. As described in our press release, the source of this jet is a quasar — a rapidly growing supermassive black hole — named PSO J352.4034-15.3373 (PJ352-15 for short), which sits at the center of a young galaxy located about 12.7 billion light years from Earth. This result may help explain how the biggest black holes formed at a very early time in the Universe's history.

The main panel of this graphic is an artist's illustration of a close-up view of a quasar and its jet, like the one in PJ352-52. To the lower left, material is orbiting around a supermassive black hole in a disk. Once it loses enough speed and energy, the material can fall farther inwards to cross the so-called event horizon, the point of no return, shown as the black disk. Meanwhile, some of this material is redirected away from the black hole in the form of a narrow beam, or jet, which is seen on the right side of the illustrations. These high-speed jets of energetic particles are powered by magnetic fields, which can cause a braking effect on the disk as energy is removed from the system. This is one key way for material in the disk to lose energy and, therefore, enhance the rate of growth of black holes.

The inset of this graphic contains X-ray data from Chandra of PJ352-15 (purple) that has been combined with optical and infrared data from the Gemini-North telescope and the Keck-I telescope respectively. Astronomers observed PJ352-15 for a total of three days using the sharp vision of Chandra to detect evidence for the X-ray jet. Chandra revealed X-ray emission about 160,000 light years away from the quasar along the same direction as much shorter jets seen in radio waves. By comparison, the entire Milky Way spans about 100,000 light years. The jet does not appear continuous in the Chandra data, likely because only the brightest part of the jet is detectable with the observation time used.

The X-rays detected from the jet in PJ352-15 were emitted when the Universe was only 0.98 billion years old, which corresponds to less than a tenth of its present age. At this point, the intensity of the cosmic microwave background radiation (CMB) left over from the Big Bang was much greater than it is today. As the electrons in the jet fly away from the black hole at close to the speed of light, they move through and collide with photons making up the CMB radiation, boosting the energy of the photons up into the X-ray range to be detected by Chandra. In this scenario, the X-rays are significantly boosted in brightness compared to radio waves. This agrees with the observation that the large X-ray jet feature has no associated radio emission.

Prior to this latest study on PJ352-15, the longest jet astronomers had observed from the first billion years after the Big Bang was only about 5,000 light years in length, corresponding to the radio observations of PJ352-15. PJ352-15 is also about 300 million light years farther away than the most distant X-ray jet recorded before it.